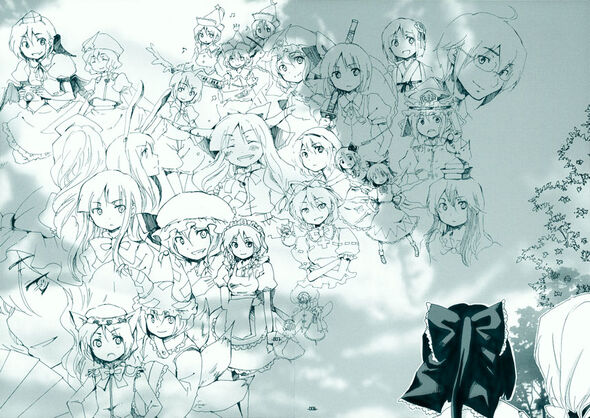 For detailed information about this series, visit Touhou Wiki or the Touhou Wiki.

Touhou Project (東方 Project) is a franchise consisting of several 2D scrolling shooting games and 2D fighters created by Team Shanghai Alice headed by a man named ZUN. It follows the various misadventures of Reimu and Marisa, a shrine maiden and a magician in the magical land of Gensokyo that's inhabited by all manner of spirits, demons, and aliens. Each game focuses on an incident causing trouble for the denizens of Gensokyo, and the incident resolvers naturally resolving these.

Additionally, the Game Uwabami Breakers also takes place in the Touhouverse, albeit in the Outside World, the verse's version of the real world.

The series consists of 21 games, some characters also make a cameo in another bullet hell game called Seihou. The complicated part is that there is a discontinuity between games 1-5 (The PC-98 era) and the rest of the games (The Windows Era). Although ZUN has stated that the 6th game was clean from the previous games and that the PC-98 Game should be ignored, he has also stated that the setting of the PC-98 games still lives to this day and just do not get to be shown, which results in some confusion over the actual canonicity of the PC-98 games.

In addition to the games, there are 5 official fanbooks, a number of short stories from Music CDs, two side-story books and 7 official mangas penned by ZUN with art from various artists. All together that makes the official canon of the series.

Embodiment of the Scarlet Devil