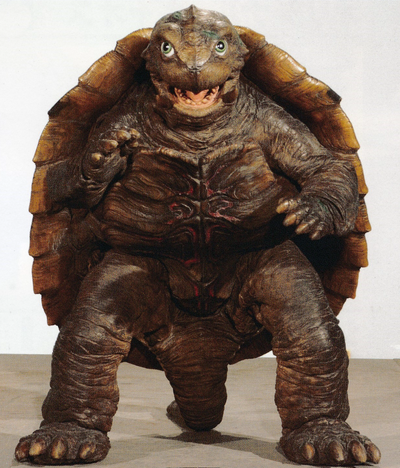 Toto (トト), acknowledged as Gamera (ガメラ) upon reaching adulthood, is a giant turtle kaiju who appeared in the 2006 Kadokawa Gamera film, Gamera the Brave. He is the reincarnation of Avant Gamera, who sacrificed himself to destroy a flock of Gyaos in 1973.

Tier: At least 9-A, higher with fire balls

Age: Some days at most

Attack Potency: At least Small Building level (Toto destroyed small buildings in his battle with Zedus, can generate this much energy by existing), higher with fireballs (Can do this with fireballs)

Durability: At least Small Building level (Took blows from Zedus who was physically stronger than him)

Range: Tens of meters due to size. At least several hundred meters with fireballs.

Weaknesses: He is too young and has little combat experience