VS Battles Wiki
Register
Don't have an account?
Sign In
in: Characters, My Hero Academia, Male Characters,
and 23 more 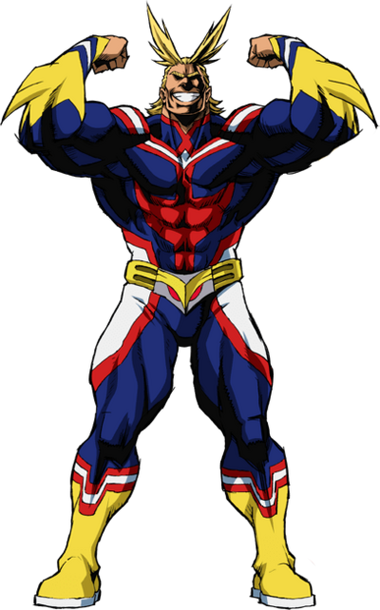 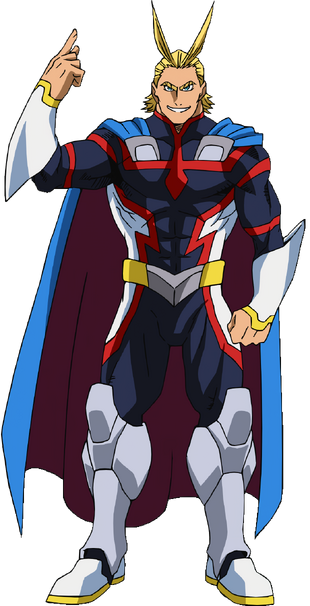 Toshinori Yagi (八木俊典 Yagi Toshinori), most commonly known as All Might (オールマイト Ōru Maito), is the former No. 1 Hero who bore the title of the world's Symbol of Peace and inspired a whole generation of heroes, including Izuku Midoriya, whom he passed the torch of One For All to. He teaches Foundational Hero Studies at U.A. High School.

Name: Toshinori Yagi, All Might (Hero Name), "The Symbol of Peace"

Powers and Abilities: Superhuman Physical Characteristics, Supernatural Willpower, Expert Hand-to-Hand Combatant (Able to fight and defeat All For One, who according to Gran Torino has more than a hundred years worth of experience), Enhanced Senses (Possesses a supernatural sight), Breath Attack (Able to put out a fire using his breath), Acrobatics, Statistics Amplification (Can increase his strength, durability, and speed with One For All), Air Manipulation (Can generate air pressure with his attacks. Can create tornadoes), Pseudo-Flight (Can propel himself through the air using wind pressure), Power Bestowal (Can give One For All to other people), Transformation (Can switch between his hero and true forms at will), Fear Inducement (Able to induce fear in villains who were prepared to assassinate him), Resistance to Power Absorption (One For All cannot be forcibly taken) and Fear Inducement (All For One's overwhelming presence doesn't affect him in the slightest)

Attack Potency: Small City level+ (Able to destroy a colossal metal structure with a punch) | City level (Created a storm with the mere shock wave of a Detroit Smash) | City level (Much stronger than in his wounded state. Stated that in his prime he would only need 5 hits to defeat Nomu instead of the 300 hits he needed in his weakened form) | Small City level+ (His strength has decreased over time, but he shouldn't be that much weaker than in his fight with Wolfram)

Lifting Strength: Class T (Is capable of pushing back against this amount of weight) | Class T | Class T (Far stronger than in his wounded state) | Class T

Stamina: Very High (Managed to break his limits and defeat All For One while being extremely injured. In his prime years, All Might was able to do hero work for more than 72 consecutive hours straight, and has never been shown to be tired even when fighting against multiple villains)

Intelligence: Above Average. All Might was the top-ranked hero in Japan for his countless acts of heroism, having spearheaded multiple operations against villainous teams and saving countless lives during large-scale disasters. He is an expert in hand-to-hand combat with an intelligence to match his strength, deducing that Nomu's Shock Absorption had a limit and simply kept beating him until he went over that limit. After a stern talking from Gran Torino, All Might has also started to drop hints for Deku that allow him to greatly improve over the span of a few hours. However, as a hero to the core, he refuses to go all out if innocent lives could be harmed by the aftereffects of his attacks

Weaknesses: Using One For All in his wounded and weakened state harms him, and he is only able to use his hero form for about 3 hours a day (which later decreased to around 1 hour and 30 minutes after giving his Quirk to Deku). His true form is sickly and often coughs up blood. He has a weak spot on the left side of his torso. Due to the destructive nature of his powers, he cannot go all out if there are innocent lives in the crossfire. Currently, his hero form is limited to seconds, preventing him from using it to do anything significant

One For All: Inherited from Nana Shimura, All Might's Quirk gave him access to an immense stockpiled power. By channeling this power through his body, All Might had superhuman strength, speed, agility, and durability. All Might was so talented with One For All that he was widely known as the most powerful person in Japan.

Sapphire (Steven Universe) Sapphire's Profile (Weakened All Might was used. Speed was equalized)

Simon the Digger (Tengen Toppa Gurren Lagann) Simon's Profile (Prime All Might was used, and Pre-Timeskip Simon was in Gurren Lagann. Speed was equalized)

Starman (Earthbound) Starman's Profile (Weakened All Might and Final Starman were used. Speed was equalized)

Natsu Dragneel (Fairy Tail) Natsu's Profile (Weakened All Might and X784 Natsu without LFDM or DF were used. Speed was equalized)

Terry Bogard (The King of Fighters) Terry's Profile (Weakened All Might was used. Speed was equalized)