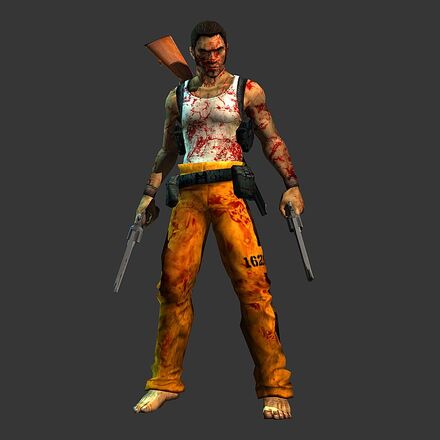 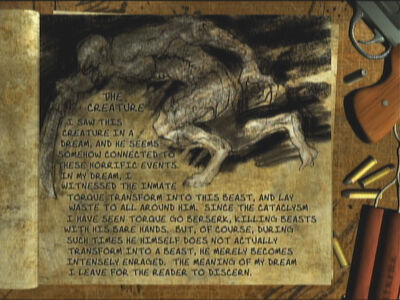 "Torque" is the main protagonist of The Suffering series and an inmate sentenced to death by lethal injection for being found guilty on three counts of first-degree murder for the death of his former wife and their two children. After being sent to Abbott State Penitentiary on Carnate Island and escorted to his cell, Carnate Island experiences an earthquake and monsters know as malefactors quickly start appearing and killing all the island's inhabitants. Torque now has to find a way to escape Carnate Island while battling his own mental and emotional problems. Torque is a deeply traumatized man who suffers from blackouts, severe delusions, fits of rage, dementia, paranoia, and dissociative identity disorder.

Tier: At least 9-A, far higher as The Creature

Powers and Abilities: Superhuman Physical Characteristics, Extremely Skilled at Hand-to-Hand and handling a multitude of weapons, Has Multiple Personalities (Blackmore and The Creature), Rage Power, Superhuman Willpower (Described many times to be extremely determined and steadfast regardless of his moral alignment), Fear Inducement (The Creature causes surrounding allies and enemies to flinch), Enhanced Senses (Can see ghosts and other supernatural phenomenons that appear invisible to others), Catastrophe-inducing Presence (Heavily implied to be followed by a supernatural event known as The Cataclysm which took place on Carnate Island and Baltimore. This event causes various phenomenons such as earthquakes, summoning malefactors, supernatural electricity, reality warping, hallucinations, raising the dead, and altering the weather), Limited-Nightmare Manipulation (Clem had vivid reoccurring nightmares about Torque and The Creature before ever meeting Torque and despite The Creature being only inside Torque's head), Accelerated Development (Abilities; Battle, Seems to be proficient with any new weapon he comes across), Regeneration (Mid-low, can heal from wounds that would cause deep lacerations, broken bones and severe burns in seconds. Also heals as The Creature), Can heal injuries with Xombium, Explosion Manipulation (With various weapons and throwables), Fire Manipulation (With Molotov Cocktails and Flamethrower), Light Manipulation (With FlashBang Grenades and Flares), Status Effect Inducement (Can temporarily blind and stun enemies with FlashBang Grenades which works on malefactors who are blind, lack eyes or even missing their entire head), Limited Non-Physical Interaction (Able to damage and kill Mainliners after they've turned into blood), Clairvoyance (His delusions often help with leading him to find clues and lead him down correct pathways to progress), Psychometry (Some visions show him events that happen multiple decades in the past with great detail ranging from voices and sounds to people and places), Social Influencing (As Blackmore; described as charismatic on many occasions, leader of the drug-trade in Baltimore, had direct control of Baltimore's legal system and on multiple occasions was able to influence Torque to do his bidding) Resistance to Perception Manipulation and Empathic Manipulation (Xombium is also used to relieve emotional stress and treat delusions), Fire Manipulation, Electricity Manipulation (Survived electricity attacks that could kill regular humans easily), Social Influencing (Learned to resist Blackmore's attempts to influence him), Mind Manipulation (Via multiple personalities and can resist Torque's Hatred mind control and hallucinations as well as resist Blackmore's attempts to take over his mind and body), Status Effect Inducement (Blind and Stun; Recovers from FlashBang Grenades faster than other humans and malefactors), Madness Manipulation (Diagnosed as insane; Has a moderate amount of control over The Creature by Ties That Bind; Can survive Blackmore absorbing his insanity), Poison Manipulation, Paralysis Inducement and Sleep Manipulation (Withstood breathing in Hermes' poison gas which can kill humans in seconds and can endure multiple attacks from Mainliners who attack with either lethal injection needles or a heroin-derived concoction that is capable of instantly killing almost any human immediately upon injection and can kill Slayers nigh-instantly with a single needle)

Attack Potency: At least Small Building level (Easily able to kill malefactors Marksmen and Burrower who can quickly burst out of ground composed of concrete, stone, and metal, which would require this amount of energy and some Captain malefactors can summon regular malefactors out of the ground), far higher as The Creature

Speed: At least Subsonic (Fought hordes of Marksmen, Suppressors, and Triggermen malefactors and who have multiple weapons embedded in their body that ranges from shotguns, carbines, automatic rifles, and sub-machine guns. He also fought large groups of trained private military soldiers), far higher speed and reactions as The Creature

Lifting Strength: At least Class 5 (Able to completely rip apart malefactors with ease and should be comparable to malefactors who can easily rip humans to pieces and can rip off metal prison cell doors. Can carry a large number of weapons and equipment of varying sizes while platforming and crouching), far higher as The Creature

Durability: At least Small Building level (Can survive numerous attacks from Torque's Hatred and The Horde who both are stronger than Inferna and Arsonists. Inferna and Arsonists' flames can scorch an entire human to ash almost instantly which would require this much energy), far higher as The Creature

Stamina: Extremely High. Torque Went a couple of days without eating, sleeping and drinking while fighting barefooted in rough terrains/areas and fighting large groups of inmates, correctional officers, malefactors, military and experiencing numerous psychotic attacks with little to no rest in between.

Range: Extended melee range (bare hands and melee weapons), Several meters with throwing weapons, hundreds of meters with firearms. Tens of Kilometers via The Cataclysm (Affected the entirety of Carnate Island and Baltimore)

Intelligence: Gifted as Torque, likely Extremely Gifted conventionally. His Blackmore persona is viewed as intelligent, extremely determined and charismatic by Jordan and Dr. Killjoy. Blackmore is completely merciless, prefers to set back and manipulate everyone as if they were pawns to not get his hands dirty himself. Even while single-handily controlling Baltimore's drug trade, he somehow never broken any laws himself. Torque, however, may not be as intelligent as Blackmore but, he makes up for it by being a combat genius. Whether it's CQC or shoot out, Torque is able to battle large groups of malefactors, humans, correctional officers, and private military personnel by himself and while protecting someone and Torque has been stated to be seen taking out packs of malefactors without even "breathing hard", however, Torque still has another persona, for lack of a better word, known as The Creature. The Creature "appears" when Torque decides to give in to his primal rage and so he regresses back to a state of "might makes right". It is a state that both Torque and Blackmore are aware of and has access to but Blackmore and evil alignment Torque uses it anyone while good alignment Torque uses it only against his enemies. When this persona comes out, Torque is filled with adrenaline, receiving superhuman levels of strength, speed, and durability and tries to kill whatever is causing him trouble. In The Suffering, Torque seems to have little control as The Creature but in the sequel that takes place right after, he has more control and can use it strategically to bypass obstacles and kill special enemies. Although The Creature is the bestial and primal side to Torque, it doesn't necessarily kill without reason.

Standard Tactics: As The Creature, he is in a constant state of Bloodlust and he fights with his bare hands.

Weaknesses: If Torque stays as The Creature for too long it could hurt him. Although not a weakness when it comes to battle, Blackmore is able to take control of Torque. Only as Blackmore, he is capable of controlling malefactors.

Retrieved from "https://vsbattles.fandom.com/wiki/Torque?oldid=6096437"
Community content is available under CC-BY-SA unless otherwise noted.