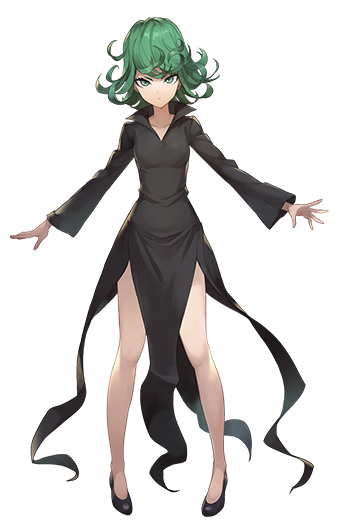 Tatsumaki (戦慄のタツマキ, Senritsu no Tatsumaki) also known as Tornado of Terror is the S-Class Rank 2 superhero, an esper and the older sister of Blizzard of Hell. Tatsumaki is one of the most powerful heroes in the entire Hero Association and is treated as one of their ultimate weapons to be used as a last resort. Despite her young appearance, she is an incredibly skilled and powerful esper. Her personality, on the other hand, can be incredibly childish, and she is fully willing to throw her power around to get her way, or when someone annoys her.

Attack Potency: Small Country level+ (Caused the destruction of a large section of City-Z by pulling the Monster Association headquarters above ground)

Speed: Massively Hypersonic+ (Usually considered to be faster than most S-Classes. Reacted to and caught large artillery shells from Lord Boros' ship)

Range: Thousands of kilometers with Telekinesis

Intelligence: Showed rather high intelligence from a young age. However, she is extremely overconfident

Weaknesses: Tatsumaki is extremely arrogant. Her defense weakens when she is attacking. Her psychic capabilities can also be considerably weakened if her brain directly takes damage. This problem will take a turn for the worse if she continues to use her powers in this state. Those with sufficiently strong wills can also resist her psychic powers.

Note: Please do not attempt to scale Mob to Tatsumaki or vice versa. The statement from ONE about this is old and outdated, and both characters have since gained very different levels of feats in terms of both speed and strength.

Start a Discussion Discussions about Tornado of Terror