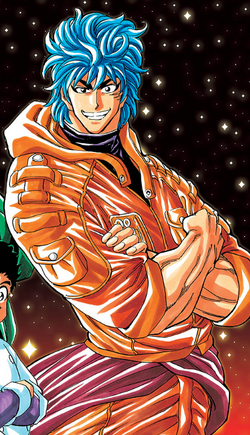 Toriko is a renowned Gourmet Hunter and the main protagonist of the Toriko anime and manga series.

He is one of the "Four Heavenly Kings", nicknamed "The Glutton" for his abnormally large appetite (as a food serving for 500 people could only get him 1/10 full), with his skill having allowed him to discover roughly 2% of the approximately 300,000 varieties of known ingredients worldwide, which is around 6000 varieties. Toriko is also notable for having a close connection, partnership and affiliation with many of the world's most influential individuals, such as being the combo partner of chef Komatsu (one of the top 100 chefs in the world), the adopted son and apprentice of IGO President Ichiryuu (alongside the other Four Heavenly Kings), the fiancée of Gourmet Research Chief Rin (one of the IGO's highest ranking officials), the adoptive father figure of a Battle Wolf named Terry Cloth (making him the only human known to have ever tamed a Battle Wolf), and is a close ally and friend of the leaders of both the Gourmet Knights (a noble order of Gourmet Hunters) and the Gourmet Yakuza (one of the world's most notable criminal organizations).

He is currently seeking the fabled holy ingredient GOD from Acacia's Full Course Menu, the reputedly greatest main dish in the world, and hopes to add it to his own Full Course Menu while also preventing it from falling into the wrong hands, despite this ingredient being sought after by the brutal criminal organization Gourmet Corp. and many other powerful figures.

While a powerful warrior in his own right, Toriko's recent endeavors have been mainly focused on entering the vicious Gourmet World. He has been vigorously training in order to enter and survive in its harsh environment and has also learned of the existence of many powerful warriors already capable of entering it. Currently, he's aiming to reach the great ingredient GOD that all of them enter Gourmet World to seek before it falls into the wrong hands.

Age: Physically 25. 29 after the timeskip

Powers and Abilities: Superhuman Physical Characteristics, Inhuman Olfactory (Surpasses that of a dog’s, can use smell alone to fight in complete darkness, although not very effectively, even capable of detecting pheromones with his sense of smell), Incredible Willpower, Shokugi expert (A fighting style based on kitchen utensils, the practitioner simulate utensils with his body and through it gains access to the properties of the utensils), Some kind of precognition and predictive capabilities, Superhuman lung capacity (Can swim underwater for an hour), High level resistance to extreme climates (-70 degrees celsius), Can move flexibly in conditions exceeding 2x normal gravity, Some resistance to poison (He has around 70 antidotes of various poisons in his body), Gourmet Cells (Cells with regenerative and strength-enhancing qualities that allows the user to evolve when they consume delicious foods, the cells can also evolve as a response to harsh new environments, instantly creating adaptations which allow the user to survive, and can also initiate other self defense mechanisms for the body), Limited Flight, Can use Appetite Energy to send out knives and forks, Can control his flying knives and forks remotely (Via Ultimate Routine) and home them in on the targets scent, Regeneration, Can manifest 2 of his 3 onis outside of his body (Which can fight for themselves), Information Manipulation via Devil Sense, Pseudo Reality Warping via Ultimate Routine (Anything Toriko can imagine, becomes reality), Supernatural Luck with Gourmet Luck (Repelled Acacia's Gourmet Punches), Healing and Self-Sustenance (Type 1, Ate AIR that allows him to heal himself incredibly fast and spend a few days in a place where there is no oxygen), Non-Physical Interaction (Drank PAIR that allows him to interact with Food Spirts and see Back Channels), Extrasensory Perception (Drank ATOM that allows him to see invisible Gourmet Matter)

Attack Potency: Multi-City Block level (Resisted the bite of a Regal Mammoth for several seconds), higher via combination attacks, Town level after eating Jewel Meat (Destroyed GT Robot) | Town level, higher via combination attacks (Destroyed a small town’s sized iceberg and matched the energy of its fall with a combination, before learning the 13-Ren Kugi Punch) | Small City level+ with punches, Mountain level with Combination attacks | Country level via powerscaling | Country level, higher via combination attacks (At least this high, his casual Flying Forks are a great threat to monsters strong enough to laugh off country busting onslaughts, can potentially send out thousands of country busting attacks at once) | At least Continent level normally. Likely Large Star level with The Blue Oni (Is able to match the Horse King Heracles) | Moon level via powerscaling | Small Planet level normally, likely much higher with the Red Oni's power (Along with Starjun, he used part of the Red Oni's power and created an attack that caused Wolf King Guiness to consider dodging their attack). At least Planet level with the Red Oni, likely higher (Was said to have been one of, if not, the strongest gourment demon of its time) | Large Star level (was capable of harming Acacia as well as countering his punch), possibly higher (After resurrecting and receiving a power up, he was able to attack and even push back current Acacia; even doing an attack that took a chunk of the planet off) | At least Large Star level, possibly higher (After Toriko consumed GOD, Center, and his gourmet red demon, he powered up to the point where he punched Neo-Consumed Acacia across the world and caught him without looking, Far superior to Neo at its peak, which consumed countless stars)

Lifting Strength: Class G (Toriko can easily lift and throw creatures well above the 100 ton range, could lift large chunks of solid rock with one arm while nearly out of energy, can resist the biting force of a Regal Mammoth) | Class G (Could support a multi-million ton ice boulder on one arm before the boulder shattered) | At least Class G (Toriko’s Gourmet Cells have evolved since the Ice Hell arc, and he’s folds stronger by this point, evident by the fact that he can use higher level Kugi Punches) | At least Class T (Carried a bowl of food heavy enough to feed the whole of the human world) | At least Class T | Unknown. At least Class T, possibly Class P (Nosh was able to hold AIR up momentarily, which has a mass equal to the atmosphere of the Earth. Toriko is likely around his level here) | Likely Class P | Class P

Stamina: Incredibly high. As of now Toriko can liberally use techniques that cost millions of calories, thanks to his Food Immersion mastery

Standard Equipment: A lot of gourmet oriented equipment, have access to Rider Suits (black suits made out of special material that rubs against itself, generating high levels of heat), usually some food to eat to restore his strength

Intelligence: Skilled combatant (Toriko has constantly shown his skill in combat and skill to adapt to an opponent superior in another field, this is evident of his battle tactic to draw his opponent into close range where he in turn, would have the battle advantage, his position as a Bishokuya also adds to his skill as a fighter, Food Honor master), doesn’t appear to be fairly book smart, expert in the field of hunting, learned Ultimate Routines to a respectable degree in under a month, when even using it more than 3 times every few months 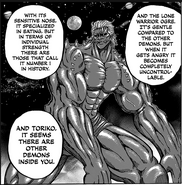 Monkey D. Luffy (One Piece) Luffy's profile (Both were 8-A, 7-C stats for Toriko were restricted)