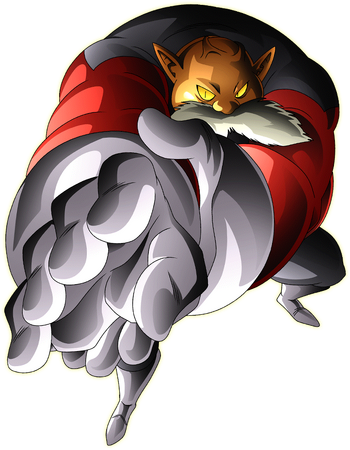 Toppo is the leader of the Pride Troopers, a group from Universe 11 tasked with the protection of the universe from all that is evil. Among them, Toppo is the second strongest, and is only surpassed by Jiren.

He also serves as the God of Destruction Candidate of Universe 11, and when banishing his inner limitations he is able to fully tap into the power of a God of Destruction, and, even though he lacks the official title, can utilize the same abilities as a GoD, such as the legendary Destruction technique.

Powers and Abilities: Superhuman Physical Characteristics, Acrobatics, Master Hand-to-Hand Combatant, Flight, Spaceflight, Self-Sustenance (Type 1), Ki Manipulation (Can be used defensively and offensively, to strengthen his skin or to fire ki blasts, which can home in on targets, and form defensive barriers), Ki Sensing (Can locate others by reading their ki), Power Nullification (Completely disintegrated a stray ki blast), Resistant to Extreme Cold, Cosmic Radiations, and Empathic Manipulation, Possibly Sound Manipulation and Portal Creation (Any character equal to or stronger than Buu Saga top tiers can perform the Vice Shout with sheer power) | Existence Erasure (Which can harm intangible beings and destroy souls), Void Manipulation via Energy of Destruction Aura, Likely limited Telekinesis (Should be comparable to other GoD's), Spatial Manipulation, Danmaku via Justice Flash (It is far faster and more effective than before, tracking targets with incredible speed and precision), as well Resistance to Paralysis (Quickly freed himself from Frieza's Imprisonment Ball), and Extrasensory Perception (Cannot be sensed by beings lesser than a God)

Attack Potency: Universe level (Fought competitively with Goku in his Super Saiyan Blue form, and even forced Goku into utilizing the Kaio-ken after getting angry. Later on, he was equally matched with Super Saiyan Blue Vegeta, and managed to push Android 17 back) | Universe level+ (As a God of Destruction Candidate, Toppo was stated to have become equal in power to a God of Destruction by the Supreme Kai, which was confirmed by Belmod in that only a GoD can access that level of power, with the narrator outright calling Toppo a GoD. When attacking, his energy shattered the the ToP stage and warped the entirety of the World of Void, a dimension of infinite size, while also undoing the visual effects created by the Grand Priest, and he was stated to have become vastly superior to both Golden Frieza and Android 17 at full power. Later on, he matched a Beyond Super Saiyan Blue Vegeta in strength for a time, but was eventually defeated), can negate conventional durability by destroying one's soul and erasing them from existence.

Speed: Massively FTL+ (Could keep up with Goku) | Massively FTL+ (Far faster than before. Able to speedblitz both Golden Frieza and Android 17, and is likely on par with a God of Destruction)

Durability: Universe level (Goku's Warp Kamehameha simply tore his clothes) | Universe level+ (Equal to a God of Destruction in attack as well as defense. Neither Android 17 nor Frieza were able to do any damage to him, and he should be at least be comparable to Belmod's), his Energy of Destruction barrier which can erase attacks that touch it makes him hard to directly damage.

Intelligence: As one of the warriors sent to represent Universe 11 in Zen’ō's Tournament of Power, Toppo is undoubtedly one of the strongest and more skilled fighters in his universe. Matching the likes of Super Saiyan Blue Goku blow for blow, he specializes in grappling maneuvers and submission holds that disorient his foes and crush their bones to pacify his foes as soon as possible.

Weaknesses: None notable | Requires time to charge up Energy of Destruction attacks.

Key: Base | God of Destruction Candidate