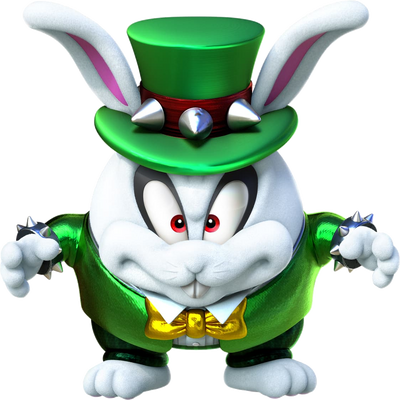 Topper is the first boss you encounter in Super Mario Odyssey, and the leader of the Broodals (Although Madame Broode is their boss). He and his gang had struck a deal with Bowser to help plan Peach's wedding and stop Mario. His main method of attack is using hats to attack his opponents.

Powers and Abilities: Superhuman Physical Characteristics, Danmaku (Can create a large amount of hats at once), Duplication, Cloth Manipulation, Summoning, Debatable Vehicular Mastery (May or may not be "driving" his hat when he hides in it, as he clearly moves in it, but recklessly), Hat Mastery and Creation, Self-Sustenance (Type 1), Resistance to Extreme Cold and Cosmic Radiations

Stamina: Presumably quite high, can fight against Mario using a high number of hats, which has been stated that Topper only uses that many when he's up against a formidable opponent.

Intelligence: Despite his gangster-like personality, Topper is quite intelligent, due to helping Bowser set up Peach's wedding, which ended up being very high quality.

Weaknesses: His hats can be destroyed, and while he rides in one, he can be attacked, forcing him out, albiet it must be a direct attack, as Cappy does not work against him when he is in it. When he is in a hat, he has no control over where he goes.

Hats: Topper has spiked hats that can be replenished if nessesary. The more hats he has on, the more dangerous of an opponent he is facing.

Retrieved from "https://vsbattles.fandom.com/wiki/Topper?oldid=5719577"
Community content is available under CC-BY-SA unless otherwise noted.