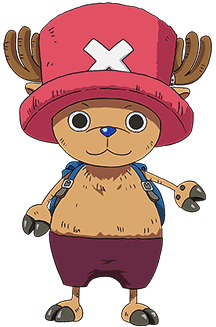 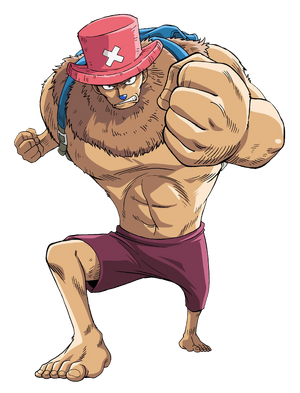 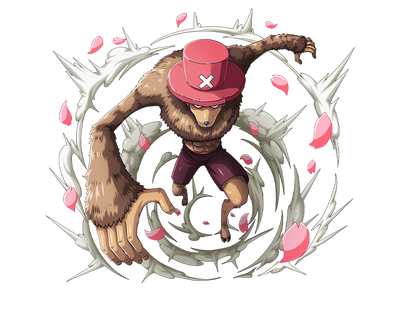 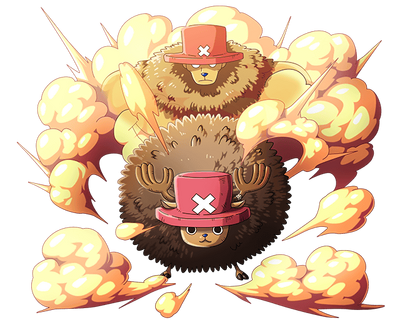 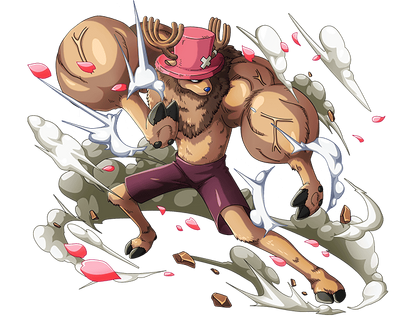 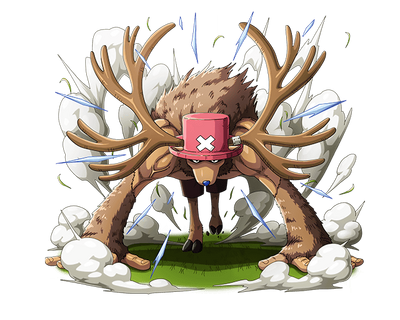 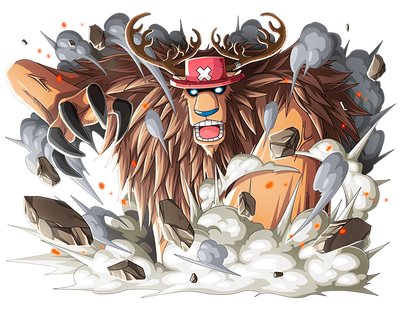 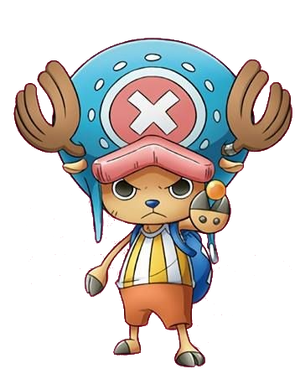 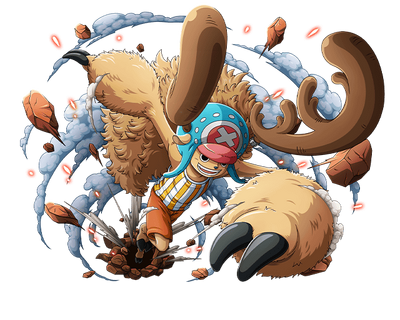 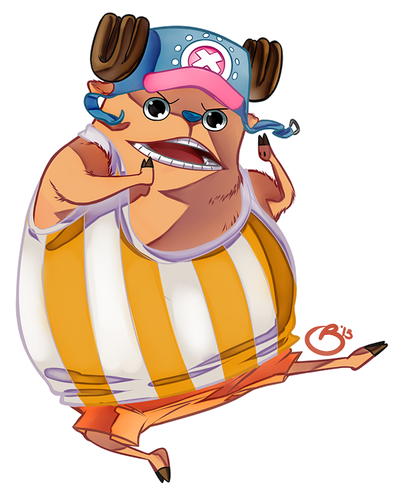 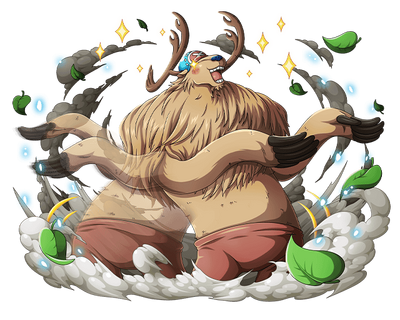 Tony Tony Chopper serves as the ship's doctor. He's a reindeer who was cast out of his herd for having a blue nose, later compounded by eating the Human-Human Fruit (Hito Hito no Mi) and being feared by the people of Drum Island as a monster. Although he initially mistrusted humans, after having met and joined the Straw Hats, he has become very curious about the world and is eager to please.

Although he doesn't normally look that way in his default form, he's not exactly a wimp when it comes to fighting. In his most humanlike form, he's quite tall and very strong. He has certain combat advantages in each of his three regular forms, and has developed a drug called the Rumble Ball to unlock more, though it carries considerable risk. In terms of personality, he's a bit naive and gullible, occasionally experiences bouts of paranoia (especially early on as he learns to trust humans), and gets combative when praise is heaped on him (though his body language usually betrays more positive feelings).

His dream is to become a doctor capable of curing all disease, due to his accidentally hastening the death of his already sickly father-figure, Dr. Hiruluk. He has also resolved to prove himself as a man worthy of being a pirate, which sometimes seems at odds with his child-like behavior and gullible personality.

His current bounty is 100 Berries. The World Government is apparently unaware of his capabilities as a doctor or a fighter, and consider him the crew's pet.

Powers and Abilities: Superhuman Physical Characteristics, Genius Intelligence, Small Size (Type 0 normally), Transformation (Can transform into various human/reindeer hybrid forms and a humanoid form), Enhanced Senses, Limited Information Analysis (Brain Point allows him to identify any possible weaknesses his target has, allowing him to effectively capitalize on them), Can speak with other animals, Natural Weaponry, Statistics Amplification (His Devil Fruit increases his physical abilities, and he can further enhance his stats with various transformations), Enhanced Jumping (Can jump and leap to incredible lengths with Jumping Point), Skilled Doctor (Skilled enough to nurse a heavily injured Zoro back to health despite him having injuries that would kill any other man), High Resistance to Cold Temperatures | Same as before, Minor Adaptation (Adapted to the oxygen shortage) | Same as before, Berserk Mode (With Monster Point), Large Size (Type 0, via Monster Point) | Same as before | Same as before except for Berserk Mode, Skilled Martial Artist (Kung Fu Point enables him to become significantly more adept and skilled in martial arts), Resistance to Mind Control (After the Timeskip he dominated the Monster Point, which in the past had made Chopper mentally insane and out of control) | Same as before

Stamina: Very High, sustained incredible amounts of damage during his fight against Mr. 4 and Miss Merry Christmas, also battled Kumadori for an extended period of time while sustaining serious injuries like multiple stabbings.

Range: Average Human Melee Range most of the time. Up to Extended Melee Range in Monster Point.

Intelligence: Extremely intelligent, Chopper is an accomplished doctor as well as a skilled and experienced combatant who exploits his opponents's weaknessess. Has a vast knowledge on anatomy.

Weaknesses: Standard Devil Fruit users weaknesses. Eating two Rumble Ball back to back within 6 hours will result in him losing control of his transformations. After consuming three, he transforms into a mindless berserker (see Monster Point below). This transformation also appears to be lethal to Chopper. He's also weak against hot temperatures due to his fur | After the timeskip Chopper can freely transform into in Monster Point and retain his senses, however this transformation only lasts 3 minutes and after using it Chopper can't move for another 2 or 3 hours | The same except for the excesive strain Monster Point puts in his body.

Hito Hito no Mi (Human Human Fruit): A Zoan type Devil Fruit, this fruit allows its user to turn into human hybrid forms and a humanoid form. By consuming the fruit, Chopper has been given human intelligence, allowing him to understand and communicate in human language. The fruit has also given him the ability to perceive concepts such as medicine that a reindeer wouldn't comprehend. The fruit is further strengthened by the use of the Rumble Ball, a drug developed by Chopper himself.

Brain Point ("Intellect Strengthening"): With a small body and large head, this form is how Chopper is generally characterized in media (see profile picture above). Different from humans who eat Zoan - type Devil Fruits, Chopper generally doesn't remain in his real form, and this can be explicated due to the advantages of having free arms, also needed for using his medical abilities. He is smarter in this form. In addition he can scope out an enemies weakness in this form while he is under the influence of a Rumble Ball. This is also the form where he does his best thinking because he can utilize both human intelligence and reindeer sensitivity at the same time.

Walk Point: This is Chopper's true form, useful for general travel on foot. It is also in this form where his olfactory senses are at their highest. As a result, Chopper often make use of his default form for tracking purposes, though certain scents seem to dull his sense of smell.

Heavy Point ("Weight Strengthening"): Chopper's "human" form, which gives him the form of a tall, muscular ape-man. He uses this form to help steer the ship. This form imbues Chopper with enhanced strength.

Jumping Point ("Flight Power Strengthening"): Chopper keeps his reindeer legs in a human-like form, which allows him to jump long distances. Pre-timeskip he needed a Rumble Ball to access this form.

Arm Point ("Muscle Strengthening"): Chopper's second most powerful form, his fore-hooves become extremely muscular in his human-esque form, allowing him to deliver devastating punches with his front hooves. Pre-timeskip he needed a Rumble Ball to access this form.

Horn Point ("Horn Strengthening"): Similar to Walk Point, but Chopper's forelegs get bulkier and his antlers become larger and sharp. In addition, Chopper has human fingers in this form. Pre-timeskip he needed a Rumble Ball to access this form.

Guard Point ("Fur Strengthening"): Chopper's fur grows out and becomes a strong shield against outside attacks. He looks like an overgrown Chia Pet in this form. Post-timeskip it is much larger, able to protect the Thousand Sunny from a blow from the Kraken. Pre-timeskip he needed a Rumble Ball to access this form.

Monster Point: It seems that the consumption of three Rumble Balls in under six hours created a new Point in which he is standing similar to Heavy Point, but possesses an oddly misshapen head and antlers, as well as an incredible (likely more than twenty feet, or about the size of an office building) increase in height and strength. Chopper's fur is lengthened in this form. Chopper also loses all consciousness and goes completely berserk. Also, this form appears to be a combination of all of Chopper's transformations, not including Brain Point and Arm Point (Heavy Point stance, Walk Point speed, Horn Point horns, Jump Point legs, and Guard Point hair). This transformation appears to be lethal to Chopper, as the amount of energy needed to maintain the form is too much for his little body to handle. The only known way to end this form is by placing Chopper into the sea. Post-skip Chopper learns how to remain in control while using this form and only needs a single Rumble Ball to access it.

Monster Point
Add a photo to this gallery

Kung Fu Point ("Flexibility Power Strengthening"): The combined, upgraded form of Arm Point and Jumping Point that Chopper added into his transformation during the timeskip. The form is average in size, being a head taller than the average person, with a squat body structure. In this form, Chopper is very proficient in kung fu, allowing versatile movement, and it seems that it combines the power of Arm Point and the acrobatic skill of Jumping Point though to a lesser degree than each individual point.

Monster Chopper
Add a photo to this gallery 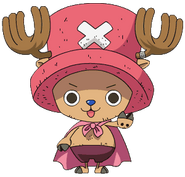 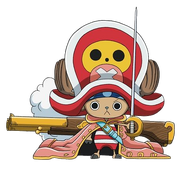 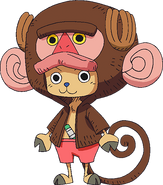 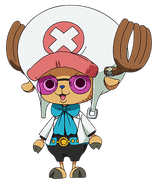 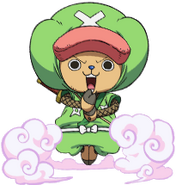 Shantae (Shantae (Verse)) Shantae's profile (Speed was equalized, Both are Low 7-B, Battle took place on the Thousand Sunny at Sea. Starting distance is 10 meters. Both had some prior knowledge. No preptime)