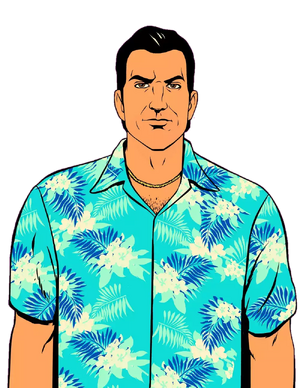 Tommy is a former member of the Forelli Family, and the leader of the Vercetti crime family in Vice City.

Tier: 9-B, higher with an adrenaline pill, melee weapons, and firearms. 9-A with a rocket launcher

Powers and Abilities: Superhuman Physical Characteristics, Statistics Amplification (with an adrenaline pill), Resistance to ordinary fire (After completing level 12 of the fire truck mission), Martial Arts, Weapon Mastery, Vehicular Mastery (Can work around with a great number of cars and can even pilot planes and helicopters), Explosion Manipulation (Via explosives), Fire Manipulation (Via molotovs), Stealth Mastery

Attack Potency: Wall level (Can destroy cars after repeatedly hitting them. Can dent metal and rip apart car doors, hoods and trunks with a few hits, can also do this to armored cars, can send people flying several meters into the air with his kicks even without the adrenaline pill. Can easily trade blows with and kill those who can slightly harm him. His strikes are somewhat comparable to, but overall weaker than his weapons), higher with an adrenaline pill (Becomes much stronger, can now kill other humans in one hit, and send them flying several meters into the air), with melee weapons (Can easily tear vehicles apart and destroy human heads in one hit), and with firearms and explosives (Can easily and rapidly blow up multiple vehicles without trouble). Small Building level with a rocket launcher (Can easily blow up reinforced military equipment with a few rocket launcher shots. Can one-shot multiple cars at once and reduce them to charred metal)

Speed: Superhuman (Far faster than everybody else in the game. Can easily outrun most vehicles) with Subsonic+ combat speed and reactions (Has consistently dodged rocket-fire and oncoming high-speed vehicles), higher with Adrenaline pills. Subsonic with most vehicles and the Dodo seaplane. Subsonic+ to Supersonic+ with firearms

Durability: Small Building level (Can tank about 4 rocket launcher shots in the face before dying. Can survive being run over by cars, tanks and even survive their explosions at point-blank range just fine), higher with Body Armor

Stamina: Fairly high (Can go for as long as he needs to in a fight, though sprinting will tire him), Nigh-Limitless after completing level 12 on the paramedic mission (This grants Tommy infinite sprinting)

Range: Standard melee range, hundreds of meters with a rocket launcher, about several kilometers with a sniper rifle

Standard Equipment: An arsenal of weapons, though he is limited to one of each type

Intelligence: Above Average (Became the head of a criminal empire during the course of Vice City and easily outwitted most of his enemies)

Weaknesses: Extremely short tempered, can be tricked at times, can't swim (However, it is highly possible that it's just a game mechanic)

Carl Johnson (Grand Theft Auto) Carl's profile (Note: Both were bloodlusted and fully equipped, however CJ didn't get access to his jetpack)