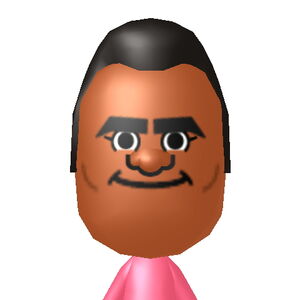 Tommy is a non-player character Mii in the Wii Sports series. He is the Champion of Basketball, a Pro at Swordplay, and a Beginner Mii in Wii Party. He does not appear in normal Wii Sports.

Attack Potency: Wall level (As a professional Swordplay athlete, he should be far, far superior to Ryan, who can slice diamonds as big as himself in half, can injure the Player Mii in a swordfight and potentially beat him, as a Champion he should be on par with, if not superior in power to, mostly everyone else portrayed in the sport)

Speed: At least Athletic Human, Likely higher (Can easily react to the Mii’s movements in a Basketball game and steal the ball right from his hands much to the protagonist’s surprise, is considered a much better basketball player than fellow Champions Elisa and Matt, and thusly should have speed on par with them)

Lifting Strength: Class 10 (As a Champion and a far superior Swordplay opponent, he should be far superior to Ryan, who can lift and throw two large diamonds bigger than himself high into the air)

Durability: Wall level (Capable of taking numerous hits around his body from the player Mii’s sword, can casually shrug off the effects of blocking (the player Mii potentially hitting him in the face multiple times with a basketball during a game), appears as a boss in Swordplay Showdown, meaning he is among the most durable opponents in the mode. Takes no visible damage from repeated hits to the face with a high velocity ping pong ball)

Stamina: High, casually plays basketball for a living and can play extensive games for a long period of time and can still aim nigh flawlessly even after receiving multiple hits to the head, can easily go multiple rounds in a swordfight, everyone who participates in Cycling are capable of biking across the entire circumference of Wuhu Island, though he isn’t exactly the best at the sport. Is among the hardest people in Swordplay Showdown to knock unconscious.

Intelligence: Is the greatest Basketball player in the world besides the player Mii. Has nigh flawless knowledge in aiming, blocking, and stealing objects, and almost never misses his Basketball shots unless the player is losing badly, which includes 3-point shots and slam dunks. Is a professional swordfighter, is nearly a professional ping pong player, and is a cyclist. On average, he has the third highest average skill level out of all Miis.

Retrieved from "https://vsbattles.fandom.com/wiki/Tommy_(Wii_Sports)?oldid=5332375"
Community content is available under CC-BY-SA unless otherwise noted.