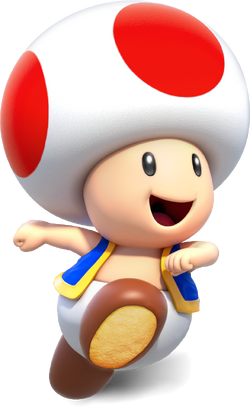 Toad is a recurring character in the Mario series, who usually reprises as a stewart of Princess Peach. He usually has the role of a supporting character who tries to help Mario and Luigi on their adventures, although he occasionally has been as a main protagonist, such as in Super Mario Bros. 2 and Wario's Woods. He is usually happy, polite, and can be benevolent to a fault as his species can be frightened easily whenever a crisis arise.

Tier: 4-A, higher with power-ups and equipment

Attack Potency: Multi-Solar System level (While not as powerful as Mario or the other recurring characters, he's capable of fighting certain foes alongside with them. Should be comparable to the other members of his species, who fought other Koopalings with the Mario Bros.), higher with power-ups and equipment

Speed: Massively FTL+ (Often shown to be much faster than the Mario Bros)

Lifting Strength: Pre-Stellar via power-scaling (Occasionally shown to have strength that even surpasses the Mario Bros)

Intelligence: Above average, has a doctorate.

Weaknesses: Easily frightened and relies on power-ups for many of his powers.