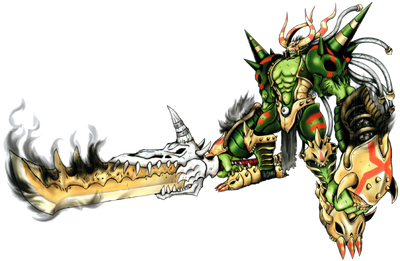 Titamon is a Digimon whose name and design are derived from the mythological Titans, progenitors and enemies of the Olympians. The titan of revenge Titamon was born from the hatred of the Digimon defeated by the Olympos XII in battles over the sovereignty of the Digital World. It holds the alias of "One-Man Division" and is treated as if it was a legion despite being a single being because it is able to instantly summon a mighty host. Bearing the inexhaustible energy of its hatred within its gigantic body, it runs through the battlefield seeking the heads of the Olympos XII. Its large arms are covered in a multitude of skulls, and the skulls are all data of the power it has stolen from the enemies it has defeated so far. As its gigantic sword "Zanjintou" (斬神刀 God Beheading Sword) is a bone sword carved from SkullGreymon's bones, the hatred filling the sword makes a low growl.

Classification: Mega-level Virus-Attribute God Man Digimon, Embodiment of the Hatred of Those Slain by the Olympos XII

Superhuman Physical Characteristics, Nonexistent Physiology (Type 1), Existence Erasure, Immortality (Types 1 and 5), Illusion Creation, Summoning, Regeneration Negation (Mid-Godly. The damage he deals to his foes' DigiCore or equivalent can never be recovered from), Power Nullification, Offensive Information Manipulation and Durability Negation via Nightmare Syndrome, Petrification, Ice Manipulation, Fire Manipulation, Invisibility, Memory Manipulation, Information Manipulation via Magic (Magic in Digimon is not like magic from other verses, but in fact high level programming knowledge), Shapeshifting, Darkness Manipulation, Status Effect Inducement, Death Manipulation, Water Manipulation, Sleep Manipulation, Dream Manipulation, Duplication, Hellfire Manipulation and Conceptual Erasure with Dark Fire (The Flames of Hell/Dark Area aka El Evangelo are purifying flames that erase those who are burnt by them. This goes so far as to being able to erase even the Seven Great Demon Lords and erase one beyond death in which in Digimon death means nothingness. Whether the flames erase one beyond nothingness is dependent on whether they are evil or not. If evil, the one who is erased will be erased beyond nothingness).

Attack Potency: Complex Multiverse level (Stated to be seeking the heads of the Olympos XII, implying that he's strong enough to match and potentially kill them), Can ignore conventional durability by directly attacking the essence.

Speed: Immeasurable (Should be at least as fast as the members of the Olympos XII)

Lifting Strength: Immeasurable (Should be no weaker physically than members of the Olympos XII, who should be comparable to Leviamon)

Striking Strength: Complex Multiversal (Seeks to chop off the heads of the Olympos XII, meaning that his blows should be at least this strong)

Durability: Complex Multiverse level (Stated to be seeking the heads of the Olympos XII, implying that he's strong enough to match and potentially kill them)

Stamina: Limitless (Stated to be kept active by an inexhaustible supply of energy generated by the sheer enmity of those who fell in battle against the Olympos XII)

Range: Several meters with his Zanjintou

Intelligence: As the embodiment of hatred of those slain by the Olympos XII, Titamon retains their combat skill and drive to defeat them. To this end, he is a surprisingly skilled swordsman who has torn through any and all in his way, as shown by the many skulls adorning his body. Despite his brutality, he has also shown to make tactical decisions when necessary, optimizing the BH Program to the point that Takuto's antivirus program would be unable to stop it before nearly managing to destroy the equipment to prevent them from implementing it at all.

Weaknesses: Titamon is driven by its desire to slay the Olympos XII, and thus can be distracted by it.

Retrieved from "https://vsbattles.fandom.com/wiki/Titamon?oldid=5387979"
Community content is available under CC-BY-SA unless otherwise noted.