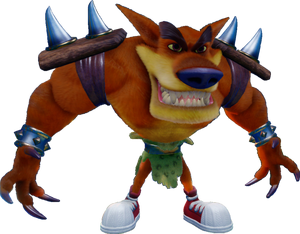 Tiny Tiger is a Tasmanian tiger initially created by Dr. Nitrus Brio. He is often seen working for Dr. Neo Cortex, the main antagonist of the series. Before Crash of the Titans where his intelligence increased, Tiny was essentially the more rampaging, bestial counterpart to Koala Kong's self-infatuated muscleman disposition.

Speed: Supersonic+ (Can keep up with Crash and track his movements in battle)

Lifting Strength: Superhuman (Physically superior to Crash. Barged through a steel door. Broke through metal chains and large stone pillars without assistance. Effortlessly lifted, tossed around, and even bent an enormous metal barbell)

Intelligence: Below Average (Prone to falling for the same trick multiple times and speaks in broken English. He can, however, competently pilot several vehicles, including a kart and a tank)

Weaknesses: Tiny is rather unintelligent and doesn't pay attention to his surroundings.

Retrieved from "https://vsbattles.fandom.com/wiki/Tiny_Tiger?oldid=5676293"
Community content is available under CC-BY-SA unless otherwise noted.