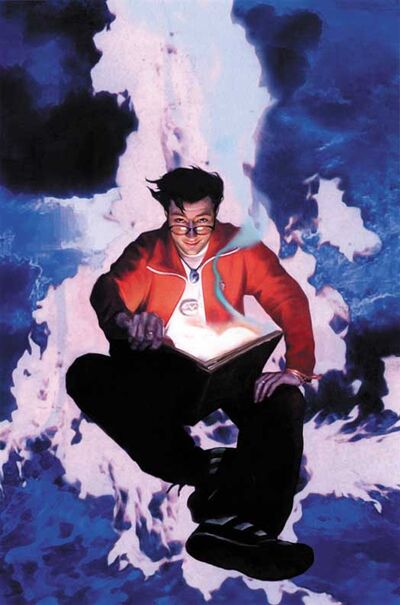 Timothy "Tim" Hunter is a young man from London, born with the titles of Opener, Maker, Sign, and Merlin. He is the conduit through which all magic enters creation, and with that power, he has the potential to become the greatest mage in the DC Universe.

At the age of 14, Tim was approached by four mysterious men, who introduced him to the world of magic and gave him a glimpse into what he might become. The Phantom Stranger took him through the history of magic, John Constantine took him to meet practitioners of magic in the present, Doctor Occult (as Rose) toured him through Faerie and various other dimensions, and Mister E showed him the future. Although these lessons were intially framed as as merely educational- allowing Tim to decide whether he wanted to pursue magic at all- Tim never really had a choice once his path had begun. He would spend the next several years of his life in constant battle with his fate, honing his powers, learning about responsibility, and trying to keep things as quiet as possible for those closest to him. So goes the destiny of The Merlin.

Origin: The Books of Magic (Published by DC Comics)

Attack Potency: At least Multiverse level (Tim has casually created more than a thousands universes with his subconscious desires alone), likely far higher (His remaining magic was far too much for his Other to channel, even after absorbing well over a thousand universes) | Outerverse level (Tim is a vessel and conduit for the Song of Magic, which endlessly makes and remakes all of creation. He is the only person who can touch and control the source of magic, becoming one with it. Compared to him, nothing is real and all other magic is dying.)

Speed: Normal Human travel and combat speed. Up to Massively FTL+ with magic (He can create entire universes almost instantaneously) | Massively FTL+ (Participated as the top contender in a massive magical war that included opponents like Doctor Fate, Etrigan, and Jim Corrigan Spectre)

Durability: Human level physically. Up to at least Multiverse level with magic (A duplicate created with only a small fraction of Tim's power was capable of briefly holding off his Other, even after he had absorbed over a thousand universes), likely far higher (His Other was powerful enough to generate a reality storm that forced open every realm across creation and prevented them from being closed) | Human level physically. Likely Outerverse level with magic (The same forces that give him his power should be capable of giving him comparable durability)

Intelligence: At least Gifted (At the age of 14, he was mentored by John Constantine and Zatanna Zatara. He successfully outwitted a variety of magical enemies, including the ancient demon Barbatos and Edu, Lord of the Wild Hunt. During his formal training at the White School, he studied under a wide variety of accomplished magicians. The Merlin of Arthurian legend also acted as his teacher and spirit guide through Yoyo, Tim's pet owl.)

Weaknesses: Tim does not have full control over his powers, and his emotions tend to affect his abilities. He cannot always call on the spell he wants, and he sometimes needs to wave his hands to cast. | None notable