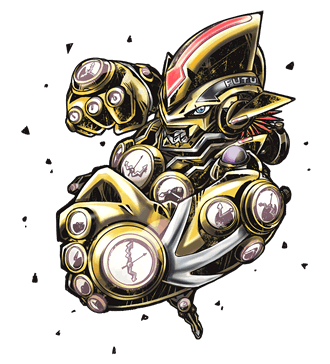 Powers and Abilities: Superhuman Physical Characteristics, Expert Hand-to-Hand Combatant, Time Travel, Time Stop, Age Manipulation (Able to return his opponent's bodies to the past or advance them in the future. Essentially aging or de-aging them), Causality Manipulation (Able to save and create backups of data. It is even capable of returning the target back to a previous state as long as a backup from that state exists.), Capable of stopping, speeding up, or even reversing the flow of time of an opponent it has punched., Memory Manipulation (Can see the minds of his opponents as well as their past. Can also make them remember their past as well.), Can arrest his opponents and alter their temporal flow thus preventing their movement, Resistance to Time-Space Manipulation (Naturally has the rare ability to transcend the flow of both time and space)

Intelligence: Timemon seems to have extensive knowledge of happenings and events throughout time. In combat Timemon seems to be a skilled fighter who naturally utilizes his time based powers to overwhelm his opponents easily.