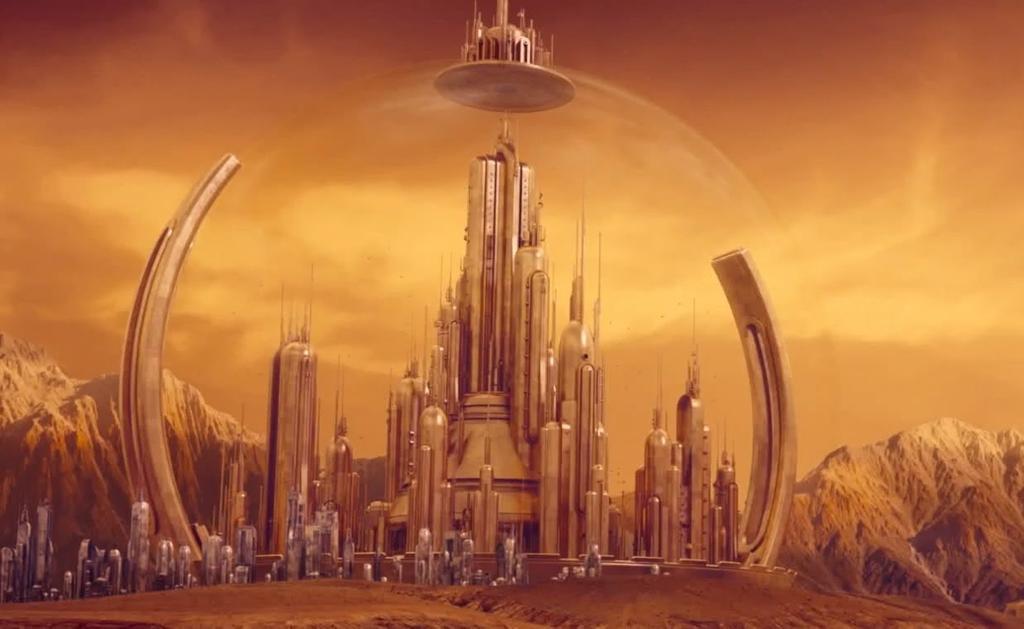 The Time Lords, also referred to as the Gallifreyans and the Great Houses, are an incredibly ancient race inhabiting the planet Gallifrey near the center of the Milky Way Galaxy, most famously known for their creation of time travel.

Many billions of years ago, during the Dark Times of the Universe, the Time Lords were one of the first humanoid species to evolve in a time when the universe was completely unstructured and chaotic. Advancing at an unparalleled rate, the ancient Gallifreyans spread their empire across the universe, subjugating any species they encountered and creating what was then known as the Fledgeling Empires. In time, the Gallifreyans would conduct the anchoring of the thread, establishing a foundation for history itself, their laws becoming the very laws of time and physics. However, as a result of this, the Great Vampires appeared in the universe and waged war against the Time Lords for a thousand years before being defeated.

After this, through the efforts of Rassilon, Omega and "The Other", the Eye of Harmony was constructed and Time Lord society skyrocketed into an almost utopian, stable society for eons. They isolated themselves for millennia, but in time their peace would be broken upon their encounter with a force only known as "the Enemy" in a conflict only known as "the War". After a half-century of conflict, the War ended with the severe weakening of the Enemy and the apparent destruction of the Time Lords. In time, the Time Lords would once again manifest, before entering the Last Great Time War against the Daleks that seemed to lead to their mutual destruction to the universe at large.

Tier: 7-A with Parallel Cannons. 4-B to 3-C with General Technology and Weaponry. Low 1-C, High 1-C with their strongest Superweapons.

Civilization Type: At least Multiversal, likely Higher-Dimensional Civilization (The Time Lords manipulate and oversee the inner workings of the Universe and beyond from Gallifrey, having been the ones responsible for the implementation of the Web of Time, and for the creation of the rational laws of physics which solidified the Universe, in a time where there was no set history or laws which defined how the Universe worked, and having been the species which kept the walls of reality stable and allowed travels to other universes. Capable of reaching through Higher-Dimensions, as the Time War was a severe threat even to the Eternals of Calabi-Yau Space, and spanned the entirety of the Time Vortex and the Ultimate Void beyond)

Name: The Time Lords, the Watchmakers, The Masters of Time, Gallifreyans, Dominus temporis, The Great Houses

Kardashev Level: Type VII (The Time Lords could manipulate and interfere with higher-dimensions and the structure of reality itself to fit their needs, creating layers of Quantum Fields and Transduction Barriers around Gallifrey which twist and stretch across all of the eleven dimensions of reality, and having been the species responsible for the Universe having solidified into a solid, consistent cosmos governed by the laws of physics, rather than magic and pure irrationality)

Age: Individual Gallifreyans are shown to be able to live for several thousand years, though their ability to Regenerate allow them to renew their bodies and extend their life up to 13 times. Collectively, the Gallifreyans are said to have been the first intelligent race in the Universe, having predated Humanity and lived for a billion years as of the last day of the Time War, whilst having maintained control over time for 10 million years as of The War in Heaven (From their own perspective, at least)

Population: At least several billion, likely far higher (The Gallifreyans are said to be the first intelligent species to evolve in the Universe, predating the human race by a vast but unknown amount of time and maintaining a wide empire which would presumably need a massive population to be kept stable. As of the Last Great Time War, The Doctor stated that there were 2.47 billion of children on Gallifrey, a number which is presumably surpassed by the total number of inhabitants in the planet)

Territory: The domain of the Time Lords is implied to have spanned across all of existence, having been the species responsible for overseeing and stabilizing the walls of reality across all universes, which allowed other beings to travel between alternate worlds, an ability that was almost completely lost upon their disappearance, as the walls they maintained became permanently closed afterwards. Furthermore, the Great Time War between the Time Lords and Daleks took place across all of time and existence, ravaging space and time and rewriting the universe and the history of countless worlds with every passing moment, severely threatening even the Eternals who inhabited Calabi-Yau Space and extending across the entire Time Vortex, as well as the Ultimate Void beyond.

Technology/Abilities: Time Manipulation, Spatial Manipulation, Physics Manipulation, Law Manipulation (The Time Lords were responsible for the establishment of the physical laws that maintain the universe, having solidified an otherwise malleable and structureless space of infinite possibility with no set history or rationality, and completely removing almost all forms of magic from it), Quantum Manipulation (Parallel Cannons can fire waves of focused neutrinos which break down matter on a quantum level), Matter Manipulation (Could remove an entire group of particles, huons, from the face of the universe), Higher-Dimensional Manipulation (Capable of interfering with, and manipulating higher-dimensions to fit their needs, even distorting Gallifrey's worldline through 11 dimensions to protect and hide it from enemy attacks), Existence Erasure (The De-mat gun is described as an omnicalculator linked to the causal nexus of Gallifrey, which once fired, rewrites all of creation and history itself so the target's physical form never existed, leaving them as a naked, incorporeal soul, cut off from causality itself), Shapeshifting, Stealth Mastery and Invisibility (The defense casts employed by the Time Lords are capable of absorbing radiation from nearby space-time events and lower their own dimensionality, allowing them to become effectively invisible by manifesting in two, one or even zero-dimensional forms), Mathematics Manipulation, Probability Manipulation, Causality Manipulation (Capable of rewriting history and make so entire planets never existed in the first place. Gallifrey's defenses are described as being sculpted from the timeline itself, being said to be "walls of causality"), Sealing (Can consign entire timelines to the Axis, as well as quantum lock unstable moments of history so they only have a single outcome), Energy Manipulation, Time Travel, BFR (Can detach entire planets from the Web of Time, as well as move them throughout the space-time continuum all the way to its end), Clairvoyance (The Web of Time was created as an extension of the mind and will of the Time Lords, and acts as their noosphere which they can use to observe and interfere with different points of the timeline), Conceptual Manipulation (Capable of manufacturing weapons which target and damage one's Identity, rather than their physical self. The Transduction Barrier has been described as a barrier of ideas.), Fate Manipulation (The Heavenly Paradigm is a machine which scans the entire timeline and ensures one always makes the best possible choices, being capable of affecting whole races and civilizations), Gravity Manipulation (According to the Doctor, the Time Lords were responsible for the existence of Black Holes), Soul Manipulation (Time Lords were capable of literally cutting off the irrational part of their own souls), Acausality (Type 4, Time Lords are stated to exist outside “the normal chain of causal events”. Due to the Transduction Barriers, Gallifrey is isolated from N-Space, being a space-time on its own disconnected from the continuum, whilst simultaneously existing in the center of the Web of Time, being more akin to a focal point in causality, rather than a "place". In order to escape the destruction of all existence caused by the Ultimate Sanction, the Time Lords would shed off their physical forms, becoming entities of pure consciousness freed from time and causality), Highly Resistant to Mind Manipulation (Should be comparable to the Doctor, who was able to close and seal his mind from the Eternals)

Mountain level with Parallel Cannons (Parallel Cannons fire out a focused stream of neutrinos, completely annihilating matter on a quantum level. Can eat through a planet in a few hours and use up its atmosphere in nine. Xenaria sliced off a mountain side and possibly flash-fried a whole forest using a Parallel Cannon). Solar System level (Stated to have created defense arrays the size of star systems. Black Stars are designed to crack open Dyson Spheres and can annihilate several billion kilometers of space, with the War King having planned to penetrate The Needle using one. Moved the solar system across two light years of space with a Magnetron, ravaging it in an event similar to a "solar fireball". Detonated stars in order to destroy Dalek forces during the Time War, and was implied to have done so with ease) to Galaxy level (Homunculette claimed that the Time Lords have taken apart whole galaxies in the past, and the technology present in their arsenal is described as powerful enough to boil one)

Low Complex Multiverse level with Artron Cannons and Klypstromic Warheads (Artron Cannons are powerful enough to destroy Chronovores, tearing apart their ethereal forms into fading tatters, and Klypstromic Warheads can poison their bodies and leave them in a weakened, broken state by irradiating the Time Vortex itself) and the Ultimate Sanction (Having been proposed by Rassilon as a last resort for winning the Time War, the Ultimate Sanction would consist of creating a paradox of magnitudes so severe that the resulting ruptures in the fabric of space-time would tear apart the Time Vortex, resulting in all of creation, alongside time itself, simply ceasing to be). High Complex Multiverse level with The Armageddon Sapphire (It is the considered the most powerful and dangerous artifact ever created by the Time Lords, born of Rassilon's darkest moments and representing the culmination of everything he ever learned about the fundamental nature of reality into a single device, with its function being the complete destruction of reality itself, agitating the Higgs bosons to such an extent that the entire space-time continuum would collapse into Calabi-Yau Space, akin to a house with its foundations gone), The Moment (Stated to be the most powerful weapon in the entire universe, vastly surpassing the rest of the omega arsenal in power and scope, and being capable of completely destroying everything inside the Time War, including the Daleks and the Time Lords), and the Eye of Time (More powerful than the power of every TARDIS ever built)

Military Prowess: Immeasurably High. Upon neglecting their duty of maintaining the stability of the Web of Time and focusing all of their resources towards the imminent war, the Time Lords were capable of warring against the Daleks in an immense conflict which constantly rewrote the universe itself and burned down histories and entire realities, reaching across higher-dimensions and even going as far as weaponizing time itself. Could employ millions of Battle TARDISes in combat against the forces of the Daleks, as well as take advantage of the mass-manipulation of several timelines to resurrect those whom they deemed useful, and can also analyze the entire continuum through the Web of Time and manipulate its biodata to replicate lost soldiers and allies to top condition. In certain instances, they would also make use of "casts", mindless phantom-drones hardwared into the Web of Time itself, or into the operating platforms of the Great Houses' TARDISes, which would act as Gallifrey's first line of defense against enemies whenever necessity arose.

The strategies of Time Lords Fleets also often consisted of blinking in and out of the Time Vortex to allow for more mobility against enemy forces, as well as placing mechanisms on specific parts of the space-time continuum to completely remove entire events from the timeline if necessary.

Weaknesses: For mysterious reasons, there are a few, select points in time and space which the Time Lords cannot directly control or access.