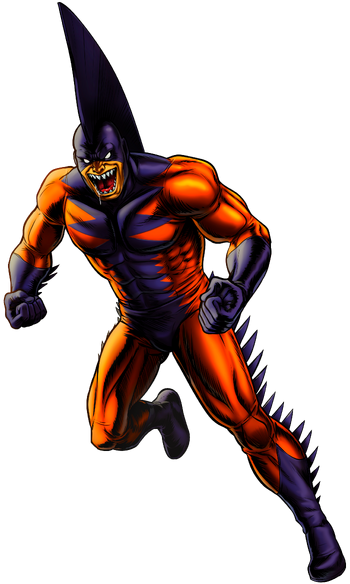 Tiger Shark was once Todd Arliss, a champion Olympic swimmer who took part in the Olympic Games. He later damaged his spinal cord when he rescued a drowning man who had fallen overboard from a private craft. Desperate to regain his swimming ability, Arliss willingly participated in an experiment by the scientist Dr. Lemuel Dorcas, who "cured" him by blending his DNA with that of Namor the Sub-Mariner and a tiger shark.

Although successful, the process changed Arliss both physically and mentally: he now had razor-sharp teeth and gills and had become savage and predatory, becoming one of Namor's greatest and most dangerous enemies.

This mutation has become a curse more than a blessing however, as his mind and appearance twist back and forth between a more humanoid look and a more monstrous look. Likewise, he has often aided his nemesis, the Sub-Mariner, and saved innocent lives, as a gesture of goodwill, and other times threatened them for no good reason. The man that was once Todd Arliss still lives, somewhere within...

Powers and Abilities: Superhuman Physical Characteristics, Natural Weaponry (Jaws/Claws), Underwater Breathing (Type 2), Body Control (Can slow down his metabolism in order to fake his death), Enhanced Senses (Has the senses of a tiger shark and claims he could smell Namor's blood anywhere in the sea), Regeneration (Low-Mid, can heal being stabbed in the brain in a matter of hours), Stealth Mastery (Is stealthy enough to sneak up on Wolverine)

Attack Potency: At least Large Planet level, possibly Solar System level (Regularly matches the Sub-Mariner at his best and many other powerful heroes and villains, though ultimately loses due to being less skilled)

Stamina: Extremely high (Can potentially fight for hours without exhaustion)

Standard Equipment: None notable, wielded a large machete when hunting down Deadpool and later an axe. When brought to another reality, he was given adamantium teeth, but he didn't keep them.

Intelligence: Varies (due to his mutation) from Below Average (Sometimes a ravenous monster that can't even speak) to Above Average (Though not as experienced as some of the characters he goes up against, he's still a seasoned olympic swimmer and a very cunning strategist, having taken over Atlantis on his own, tricked and fooled superheroes and being chosen as one of Attuma's/Nerkodd's generals to lead his armies)

Weaknesses: Staying out of the water for too long will weaken him. 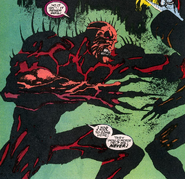 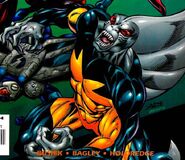 Further mutated by the Thieves Guild

Retrieved from "https://vsbattles.fandom.com/wiki/Tiger_Shark_(Marvel_Comics)?oldid=6243241"
Community content is available under CC-BY-SA unless otherwise noted.