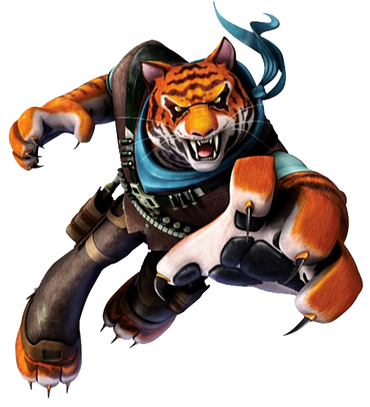 Tiger Claw, birth name Takeshi is a secondary antagonist in the half of the 2nd season and the 3rd season of Teenage Mutant Ninja Turtles. He is a skilled assassin/bounty hunter from Japan who became one of Shredder's hench-mutants when Shredder came in search of recruits.

Attack Potency: At least Small Building level (Could put up a fight against Hamato Yoshi, though was evidently outclassed. Has fought off all four Turtles in combat, though on most occasions he is simply portrayed as comparable to Rahzar and only moderately superior to the Turtles. Has overpowered Karai on multiple occasions. Physically superior to the likes of Casey Jones and April O'Neil)

Lifting Strength: At least Class 5 (Stronger than the Turtles)

Durability: At least Small Building level (Can take hits from even Hamato Yoshi, who is equal to the likes of The Shredder)

Intelligence: High combat-wise (Credited as the most feared assassin in all of Asia and sought by the Shredder for his skills. Can outfight the likes of Leonardo and put up a fight against Splinter)