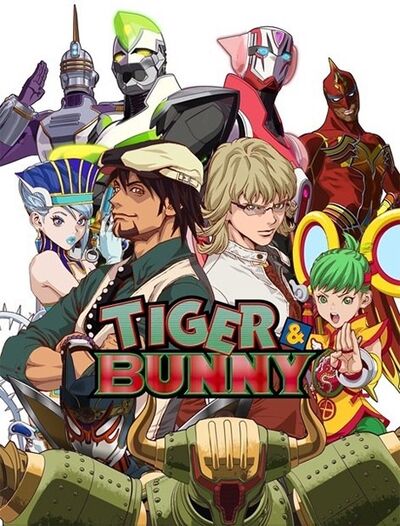 Tiger & Bunny (タイガー＆バニー Taigā Ando Banī?) is a 2011 Japanese anime television series produced by Sunrise under the direction of Keiichi Satou. The screenplay was written by Masafumi Nishida, with original character design by Masakazu Katsura. The series began its broadcast run in Japan on April 3, 2011 on Tokyo MX, followed by rebroadcasts on BS11 and MBS, and ended on September 17, 2011. Viz Media are also simulcasting the series, streaming on Hulu and Anime News Network. It is set in a futuristic city called Sternbild City which is the home to people called "Next," who use their special abilities to protect the people as superheroes. These heroes solve cases and save lives so they can wear sponsor logos or acquire "hero points." Their activities are documented on the popular program "Hero TV," which picks the "King of Heroes" in a yearly ranking. The veteran hero Wild Tiger has always preferred to work alone, but now he's been assigned the rookie Barnaby Brooks Jr., who has a different perspective on being a superhero.

A one-shot manga drawn by Masakazu Katsura was published in Shueisha's Weekly Young Jump magazine on August 4, 2011 and the production of two films based on the series were announced during a special event on November, 2011. The first film, entitled Tiger & Bunny: The Beginning was released on September 22, 2012. The second film, Tiger & Bunny: The Rising, was released on February 8, 2014.

Tiger & Bunnyverse isn't that strong. It generally consists of characters that are building level with supersonic speeds. They lack any serious hax outside of Blue Rose's freezing ability as well.