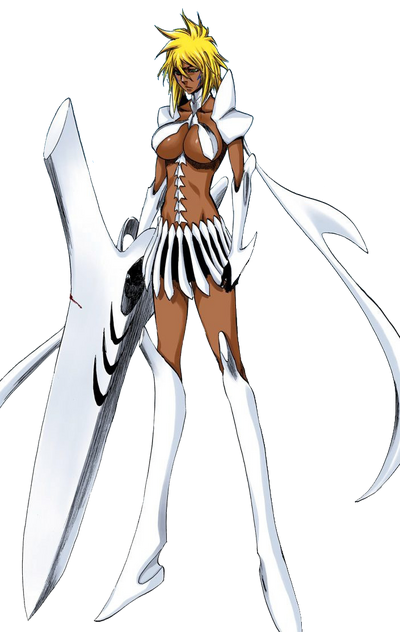 Tier Harribel is the 3rd Espada of Sosuke Aizen's army, and, following his defeat, the ruler of Hueco Mundo. As an Espada, the aspect of death she symbolizes is sacrifice.

Attack Potency: Large Island level (Stated by Ulquiorra that she was above him. Her Gran Rey Cero is this strong) | Country level (Her Resurrección was stated to be powerful enough to destroy Las Noches. Should have the same effects as the Gran Rey Cero. Her normal Cero is an order of magnitude lower than Cero Oscuras and her Cero Oscuras should at least be this strong)

Stamina: Very high. Lesser characters can fight for days, and Harribel can fight even when affected by injuries that would be lethal for humans.

Range: Extended melee range, Hundreds of meters to Kilometers with her abilities

Intelligence: Though she may be quiet, Harribel is a highly intelligent, intuitive fighter who can discern her opponent's thoughts by judging their demeanor. During the battle between Ichigo and Grimmjow, she noted their similarities when it comes to Reiatsu, and while fighting Hitsugaya, she was able to see through his personality and skillfully hold her own, using his own techniques against him.

Descorrer: A technique used by Arrancar to travel between Hueco Mundo and other worlds, creating a spiritual pathway called a Garganta with a gesture, walking through this portal to arrive at their destination in an instant.

Pesquisa: A perception technique used by Arrancar, which sends out a pulse that detects nearby sources of Reiatsu and gauging their power.

Tiburón: Harribel's Resurrección. It's release command is Destroy, and when released, it surrounds her in a surge of water from which she exits, with the remains of her mask growing to become a collar and transforming Tiburón into a large, broad pata resembling a shark's tooth. This transformation allows Harribel to create and control water, producing it from the gill slits on the sides of her sword. Her physicals are greatly increased as well.