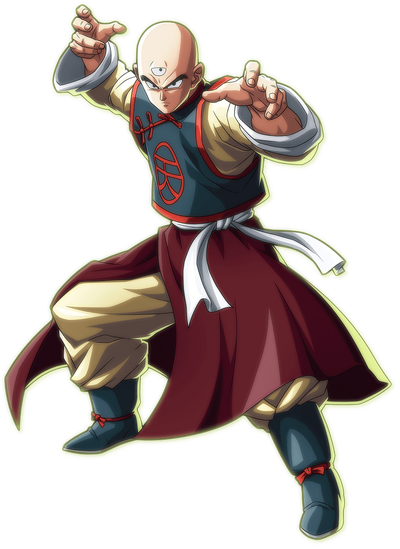 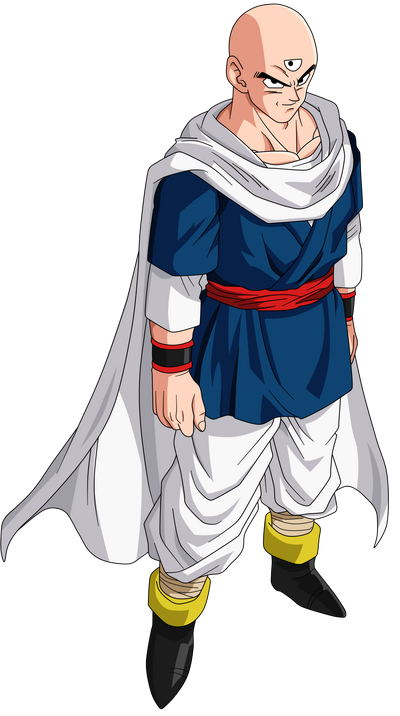 Tien Shinhan is the prized top student of the Crane School, taught by Master Shen and his younger brother, Tao Pai Pai. Originally an adversary of Goku and the rest of the Turtle School, with his and Goku's dramatic fight during the 22nd Budokai, Tien grows to become a better person and an ally of Goku and his friends, leaving behind Shen's Crane School and eventually founding his own school of martial arts.

Powers and Abilities: Master Martial Artist, Superhuman Physical Characteristics, Accelerated Development (Training; Physical Stats, Abilities), Acrobatics, Ki Manipulation (Can be used defensively and offensively, to strengthen his skin or to fire ki blasts, which can home in on targets, and form defensive barriers), Ki Sensing (Can locate others by reading their ki), Flight, Shockwaves Generation, Afterimage Creation, Attack Reflection (Tien can reflect attacks with his Kiai), Body Control (Using the Four Witches technique, he can grow an extra pair of arms), Duplication (He can duplicate himself up to four times with the Multi-Form technique), Light Manipulation (Can create flashes of light to blind opponents), Power Mimicry (Replicated the Kamehameha after seeing it used once), Pressure Point Strikes, Sealing, Telepathy | All previous abilities, Resistance to Empathic Manipulation (Was unaffected by Ribrianne's Light of Love, which causes anyone who smells the aroma released by the attack to become infatuated with her and the other Kamikaze Fireballs)

Attack Potency: At least City Block level (Superior to Tao Pai Pai and comparable to Goku), Multi-City Block level with Kikoho (Destroyed the Budokai ring) | Likely Mountain level (Easily defeated Cyborg Tao and fought against a casual Goku) | Planet level (Easily defeated a Saibamen) | Planet level (Not too far behind Krillin at this time), far higher with Kikoho (He managed to pin Semi-Perfect Cell down by continuously using the attack, but this badly drained and nearly killed him) | At least Planet level (Superior to his Android Saga self and capable of briefly distracting Buutenks) | Large Star level (Managed to destroy a good chunk of the Kachi Katchin arena, which should make him far stronger than Buu Saga Base Gohan, who was unable to destroy regular Katchin)

Stamina: Very high. Tien was able to match Goku in a very drawn-out battle during the 22nd Budokai, in which he took a lot of punishment, but his most powerful technique, the Kikoho, rapidly drains his ki and can even leave him near-death if he overuses it.

Intelligence: As the prized student of the Crane School, Tien Shinhan is an incredibly skilled martial artist, a peer of Goku's during their first fight in the 22nd Budokai. Intelligent and analytical, Tien is a cunning fighter who makes clever use of his many techniques in combat, on top of his sheer skill. His aptitude for ki techniques is sufficiently enough for Tien to replicate the ki-based abilities of others, using them for himself.

Weaknesses: The Multi-Form technique divides Tien's strength between his four copies, and the Kikoho rapidly drains his ki, to the point that, if he overuses it, it will leave him near-death. The Mafuba requires a container for its use.

Ki: The fighting power and life force of a martial artist, a tangible energy derived from the user's vigor, courage, and mind. It can be used in a number of ways, such as to surpass the limits of one's body to greatly increase in strength, and it can be fired as blasts of energy or used to create defensive barriers. The greatest student of the Crane School, Tien proved himself a skilled user of ki from an early age, excelling in his martial studies and in the use of ki, showing the ability to quickly replicate the ki-based abilities of others after seeing them in action.

Mafuba: Also known as the Evil Containment Wave, the Mafuba is a mystic sealing technique designed to seal evil away by sucking them into a special container with a "demon seal" ofuda on it.