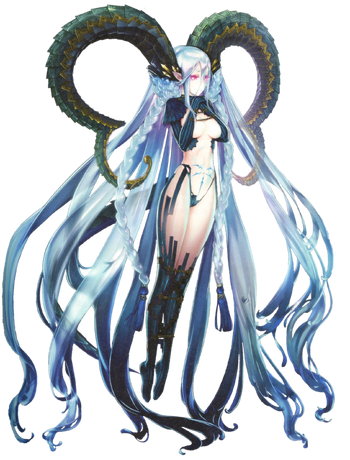 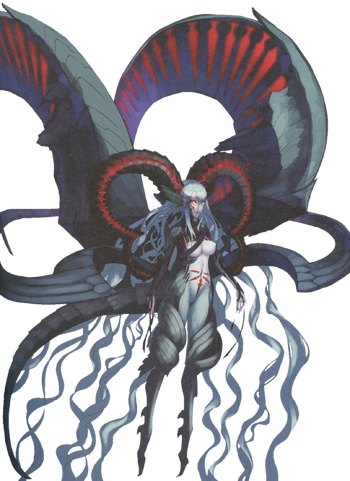 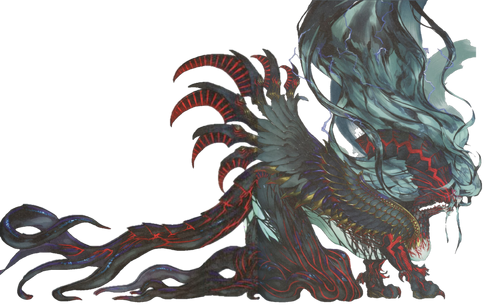 Tiamat is a primordial Mesopotamian Deity who appears in Fate/Grand Order as a Beast-class Servant known as Beast II.

In Sumerian Mythology, Tiamat gave birth to the Gods with her husband Abzu. However, her kids staged an act to kill their primordial father, an act that she gently approved of, and, soon after, point their blades at their very mother, who in her despair birthed 11 other divine beasts to fight against her original children but was eventually defeated, her body having been torn in two to become the heavens and earth.

However, Tiamat was not killed but rather banished to the Imaginary Number Space instead, having been sent there after fulfilling her role as the mother of all life on the planet and thrown aside when the earth's environments have stabilized and its ecosystems have been established. This caused feelings of resentment, hatred and sadness to grow within Tiamat, and so the Goddess herself from then on, who was deemed unnecessary after her role was finished, patiently waited in Imaginary Number Space for the time she will get her chance to come back and reclaim the very world she birthed.

Age: As old as Earth itself

Powers and Abilities: Superhuman Physical Characteristics, Acausality (Type 3), Shapeshifting, Size Manipulation, Immortality (Types 1, 2, 5 and 8; Cannot be killed unless all other lives on Earth are wiped out, and lacks a concept of death), Statistics Amplification (Can bolster her physical strength with her Monstrous Strength skill), Soul Manipulation (Can modify the Saint Graphs of Servants, who are spiritual beings), Mind Manipulation (All those who enter her Sea of Life are subject to a geas on the cellular level, making them her minions and enemies of humanity), Invulnerability (Nullifies all attacks below a certain threshold through her Self-Modification skill), Flight, Energy Blasts, Bears authority and power over all those born from her womb (particularly heroes, gods, and humanity, making it far more difficult for them to resist her attacks), Supernatural Luck, Minor Fate Manipulation (Servants with B-rank Luck or higher can change their own fates to evade inevitable outcomes such as having their hearts destroyed by Gáe Bolg), Conceptual Manipulation (Opposes evolution on a conceptual level, granting her resistance to any special attack or legend created in proper history), Can birth an infinite number of monsters from her womb and release an infinite amount of corrupting mud from her body, Space-Time Manipulation (Caused a space-time quake upon awakening), Regeneration (At least High-Low. Healed from the damage caused by her fall into the underworld and restored its damaged wings. When Gorgon was holding Tiamat's Authority, she continuously regenerated from damage. Low-Mid over time; Servants are able to continue fighting even with a hole through their gut, and can regenerate unless their head/heart are destroyed, or they run out of mana), Servant Physiology, Resistance to Death Manipulation (Does not possess a concept of death unless it is forcefully placed upon her), BFR (Can resist Rayshift with Independent Manifestation), Existence Erasure, Matter Manipulation, Information Manipulation, Probability Manipulation, Sealing, Time Manipulation, Reality Warping, Causality Manipulation, Life Manipulation, Fate Manipulation, Power Nullification and Illusion Creation (Capable of resisting Authority due to having Authority herself)

Attack Potency: Multiverse level+ (Gave birth to the Earth itself and all of its life forms. Her data provided BB her power and Authority as a facet of the Earth Mother Goddess. Easily fought Ishtar, who can fire the concept of Venus with her Noble Phantasm, and Quetzalcoatl, who can easily bat Ishtar's attacks around like baseballs, although Quetzalcoatl was heavily weakened and half-dead during their fight. Her monsters are able to harm Kingu, who possessed the body and powers of Enkidu. Should be stronger than in complete Beasts like Mara, due to her being a complete Beast)

Speed: Massively FTL+ reactions and combat speed in her manifested form (Should be superior to incomplete Beasts, such as Kama and Kiara), possibly higher (Existed in a realm of imaginary numbers with no parallel universes), Nigh-Omnipresent otherwise (Exists across all of space-time)

Lifting Strength: Unknown (Is said to be a four-dimensional pocket filled with infinite mud)

Striking Strength: Multiversal+ (Is at least as strong as Quetzalcoatl, who can easily return Ishtar's attacks, including the concept of Venus)

Durability: Multiverse level+ (Even the power of other Divine Spirits like Ishtar and Quetzalcoatl can barely damage her, required the cooperation of numerous goddesses including Ereshkigal to throw into the Underworld, as well as King Hassan to inflict the concept of death on her)

Range: Planetary (If made to go berserk and left to herself, she can cover all of Earth's surface in her mud within a day), Multiversal+ with space-time quakes

Standard Equipment: The endless amounts of monsters she bears in her womb, which possess her Authority of the Beast skill, An infinite amount of mud from her Sea of Life

Intelligence: Tiamat seems to lack a personality or intellect above that of her innate maternal instincts and desire to survive, with the only meaning to her existence being her desire to give birth to, raise, and love her children. However, she is obsessed with exterminating humanity so she can give birth to all life once more.

Weaknesses: She cannot step on land as the primordial sea of life. If she is somehow removed from Earth, her ability to remain living for as long as life exists on Earth will be nullified. Sufficiently powerful concept users can force the concept of death on her.