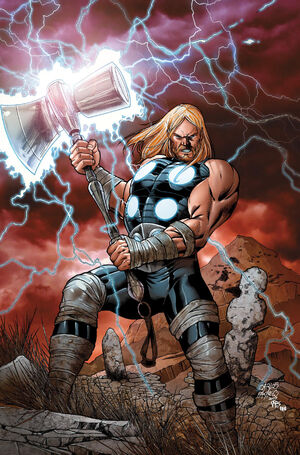 Thorlief Golmen, or Thor, was a Norwegian psychiatric nurse who seemingly suffered a psychotic breakdown when he was 29. Thor became convinced he was truly the Norse god of lightning sent to earth to save it in its direst hour of need, and his mental instability and radical left wing politics greatly concerned the Norwegian government. Since the government had already invested billions of dollars attuning their super soldier technology to Thor's biology they allowed him to take to the world stage as the superhero Thor. Armed with a hammer and harness that granted him immense strength and durability and the powers of flight, lightning control, and teleportation Thor quickly established himself as one of the most powerful superhumans on the planet and he soon became an ally of the American super team the Ultimates.

Although others were highly skeptical of Thor's claims of godhood, Thor eventually proved his divinity as a true son of Asgard and exposed his evil brother Loki's attempts to inveigle Thor's true origin. Thor truly was a god, chosen to wield the hammer Mjolnir, and sent by Odin to save the world. Although Thor's godhood would eventually be stripped from him by The Maker he soon after recreated his powers through technological means, eventually sacrificing himself to save the entirety of his world from the threat of Galactus.

Speed: Supersonic+ (Casually blocked gunfire from a Browning M2, which can hit speeds of over 890 m/s)