VS Battles Wiki
Register
Don't have an account?
Sign In
Advertisement
in: Tier 6, Tier High 6-C, Tier 3,
and 78 more 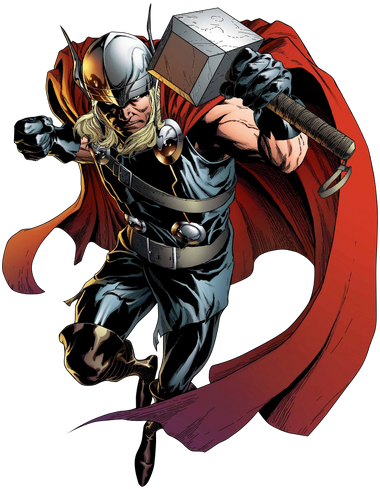 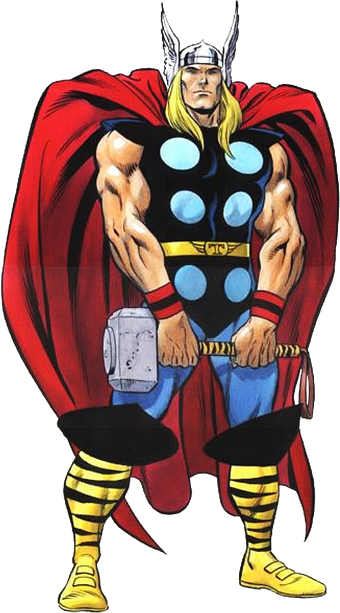 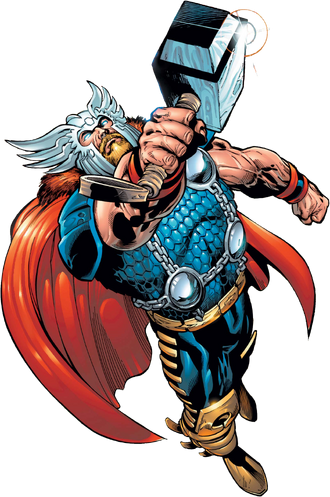 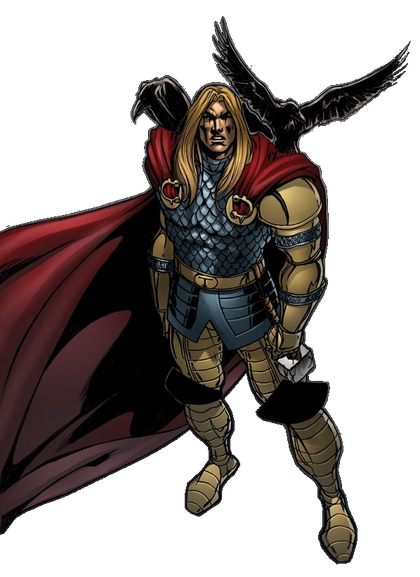 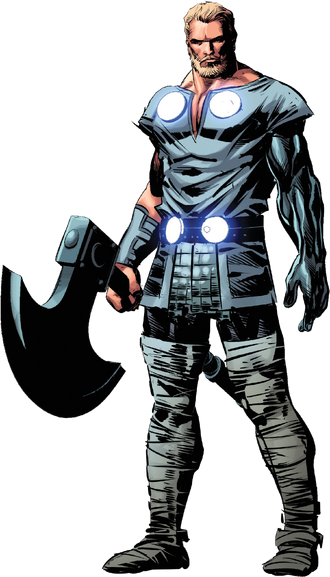 Thor Odinson is the Asgardian God of Thunder and the son of Odin, the All-Father of Asgard, and Gaea, the Elder Earth-Goddess. Combining the power of both worlds, Thor is arguably the greatest and mightiest defender of both. Armed with his powerful enchanted hammer Mjolnir, Thor is the mightiest warrior of Asgard, a founding member of the Avengers and one of the strongest, most powerful beings on Earth.

Superhuman Physical Characteristics, Longevity, Regeneration (At least Low, possibly Mid-Low), Self-Sustenance (Type 1), Magic, Enhanced Senses (Can hear what happens light years away. Can hear things that humans cannot hear, and can see invisible beings like Aphrodite that cannot be perceived by any mortal except her son and Anquises.[1][2]) Extrasensory Perception (Found the way out of a pocket universe within Tesseract.[3]), Statistics Amplification (Can double his strength with Megingjord, or increase his strength tenfold with the Warrior’s Madness), Berserk Mode (via Warrior's Madness), Elemental Manipulation (Weather Manipulation, Electricity Manipulation, Air Manipulation, Earth Manipulation, Fire Manipulation), Energy Projection, Aura, Memory Manipulation, Vibration Manipulation (Via shockwaves), Breath Attack (hurricane-force breath), Telepathy (As Donald Blake, he could telepathically communicate with Odin. And limited telepathy via All-Tongue), Telekinesis (With the Anti-Force.[4]), Combat Expertise, Weapon Mastery, Illusion Creation, Limited Resistance to Illusion Creation (Can detect a magic illusion), Can summon his chariot and his goats, Resistance (To outer space conditions, acids, diseases, radiation, poison, Gamma radiation, extreme temperatures, electricity, and Absolute Zero), Astral Possession, Limited Sound Manipulation (Can generate sonic booms.[5]), Age Manipulation, Time Stop, Soul Manipulation, Mind Manipulation ("Deliberately" failed to subdue Valkyrie while commanded to do so due to trying to resist his controller's will, but was still being manipulated[6]), Sealing (Broke a Proton Cage[7]). Mjolnir grants him Flight, Forcefield Creation, Energy Sensing, Energy Absorption and Redirection, Sealing (Sealed Hyperion in a glass sphere.[8]), Vacuum Creation, Healing (As shown here.[9]), Homing Attack, Projectile Reflection, Non-Physical Interaction (Can affect souls and touch energy beings.[10][11]), BFR via Portal Creation, Matter Manipulation (Transmutation, Antimatter Manipulation and Atomization), Resurrection, Power Nullification (Can negate mystic forcefields and certain types of intangibility, and has anti-magic.[12]), Magnetism Manipulation, Electromagnetism Manipulation, Invisibility, Intangibility, Heat Manipulation, Teleportation, Soul Summoning, limited Holy Manipulation, Mind Manipulation, Sound Manipulation, Light Manipulation, minor Reality Warping (Spun to create a vortex which "tore at the very fabric of reality" with his hammer, allowing him to revert the effects of technology that was sending him to another dimension[13]), Dimensional Storage (shown here), Resistance to Statistics Reduction (Loki created and used a potion to reduce his brother's power, but Thor was unaffected.), BFR (As shown here.[14]), Vibration Manipulation (Survived "vibro-mines" which shatter anything they touch. Mjolnir was close to the exposure to the Antarctic Vibranium aka Anti-Metal that destroys any other metal via Vibrations.[15][16]), Paralysis Inducement (Although he was initially overpowered by a mind thrust that paralyzed his entire body, through will, Thor freed himself. After that, an annoyed Thor easily resisted else another attempt[17]), Time Manipulation (Withstood a time storm.[18]), Deconstruction (As shown here.[19]), Corruption (Type 1: Resisted various of Madame Hydra's spells of control from turning him into a slave of Hydra.[20]), Antimatter Manipulation (Resisted attacks from an Electro completely made of anti-matter and an explosion of matter and antimatter annihilation.[21]). Mjolnir by itself has Mass Manipulation and resistance to Magic, antimatter (As shown here.[22]) and transmutation.

Can use all the powers of his base form without the use of Mjolnir, and increase their potency astronomically to Odin's level. He should also have all powers and abilities of Odin. Additionally, he has Heat Vision, Enhanced Matter Manipulation (Create Food, and rebuild the moon at the Molecular level), Fusionism (Merges Jake Olson with his past self.), Time Stop (Shown here), Power Absorption (He was able to absorb and steal the Power Cosmic from a Well Fed Galactus), Clairvoyance (He can see what Hugin and Munin see), Possession and Soul Manipulation (Thor's Ravens can extract his soul and take it to a new container, such as the Destroyer armor), Resistance to Power Nullification (It was mentioned that there is no one on earth capable of nullifying the Odinforce, Balder believed that Doctor Strange could not do it, and the stranger himself confirms this indirectly when it is mentioned that no one on earth can turn off the Odinforce, having to use the power of the other pantheons to do it.), Existence Erasure (Thor mentions that the Odinforce allows him to erase people from existence, but Desak is protected, and it is proven to be true. Ulik also mentions that Odin could erase from existence with a single blink.)

All powers of his base and Odinforce forms, combined with Fate Destruction and Resistance to Fate Manipulation (Those Who Sit Above in Shadows, beings that weaved the fate for all Norse beings, could no longer bind Thor to the Thread of Fate), Immortality (Type 1 and 4; Was reborn after hanging himself, evolving past death), Soul Manipulation, Biological Manipulation, Telepathy. Cosmic Awareness and Precognition (After losing his sight, Thor could see the past of all things, noticing the Cycle of Ragnarok, seeing the present, the future, every aspect of reality, from quantum level to cosmic structures or absolute nothingness and his crows contains all the thoughts and memories of all the beings in Yggdrasil.), Forcefield Creation and Extrasensory Perception (Thor blocked a hit of Mangog and could feel his magic levels), Should also have all of Odin's powers but to a higher degree.

Attack Potency: Large Island level (Usually operates under a far lower power level in fear of killing his mortal opponents. Has repeatedly fought Hulk, Loki and Wrecker, and has contented with the Thing, Dr. Doom, Namor and Super-Skrull), Galaxy level at peak (It is hinted that he shook the universe as a side effect of the launch of Mjolnir. Created a storm so powerful that its winds reached the Earth from Asgard, causing great destruction. By amplifying his power by just two times, he was able to destroy the material of which the armors of the Celestials are made and he was also able to destroy an avatar of Exitar. Such material is capable of emerging unscathed from galactic explosions. Slightly dented the Silver Surfer's forehead with a headbutt. Loki even commented that Thor had greater strength than the Silver Surfer while fighting a serious Norrin.), higher with the Thermo-Blast (Bested Ego). Up to Low Multiverse level, possibly Multiverse level+ with the God Blast (Defeated Zelia, who had twice the strength of Odin.) | At least Low Multiverse level, possibly Multiverse level+ (With only an incomplete version of the Odin-Force, he fought against Knull, being his only rival at that time[23]. Uses The Destroyer for physical training and was considered by the Super Celestial computer to be capable of killing the Phoenix Force[24]), Multiverse level+ with power absorption (Able to completely drain the Cosmic Power from Galactus, who had more power than ever at the time) | At least Multiverse level+, possibly Low Complex Multiverse level (More powerful than The Destroyer at its peak, and surpassed "Those Who Sit Above In Shadow", celestial beings who are as powerful compared to the Asgardians as they are to humans, and destroyed the never-ending Ragnarok cycle that the 9 Realms were bound in forever, which had been created by these beings)

Lifting Strength: Class Y (Lifted the Midgard Serpent, who holds the entire Earth, and supported a weight equivalent to 20 planets)

Stamina: Superhuman (He fought an army of Frost Giants for 9 months without tiring, and an army of undead for 40 days and 40 nights straight. Spent 9 months without ever sleeping after losing Mjolnir. Gave Malekith a beating after his liver got transmuted into a mangle of broken glass. Far superior to any ordinary Asgardian, who can live for 5 minutes after losing their hearts. Thor waged a war for 2 years without sleep or eating food)

Intelligence: Gifted. Despite his usual tendency to charge head-first into battle, Thor is a veteran warrior with thousands of years of experience using different weapons and fighting many different kinds of foes across the universe and will exploit an enemy’s weak points to his advantage in the midst of battle. When the situation calls for it, Thor can come up with plans that can fool even his most cunning foes, such as Loki or Malekith the Accursed. He is also a highly skilled medical doctor, although he no longer practices the profession. The magic of the Runes and knowledge from the Well of Mimir formerly gave him the knowledge of Odin and even allowed him to surpass his father (He could see into the past, present and future simultaneously, beyond quantum structure, beyond cosmic architecture.)

Standard Tactics: Thor infamously holds back his immense Asgardian strength against most mortal opponents in fear of killing them, due to his benevolent nature.

Weaknesses: Thor’s tendency to hold back against foes of Earthly roots, as he fears his full might may destroy them, sometimes results in Thor being caught by surprise. His statistics amplification methods have very heavy drawbacks (using Megingjord will later leave Thor in such an exhausted state he can barely walk, while the Warrior’s Madness robs Thor of his ability to differentiate friends and foes) | Like Odin, Thor will have to enter a slumber called the Odinsleep once a year to replenish the Odinforce, which leaves him vulnerable to attacks. In addition, Mjolnir is currently broken, anyone can lift it even if they are unworthy like Loki.[25] | Thor’s Fate Manipulation cannot rewrite the past and could only destroy the future Fate that bound the Nine Worlds to the cycle of Ragnarok.

Thor can now use all of his powers displayed in his base form, even without the use of Mjolnir, and amplify their potency to Odin’s level. However, he did not demonstrate every power displayed by Odin.

In this state, Thor has surpassed all beings within the Nine Realms and even its gods. He can use all of his powers in his base and Odinforce forms, as well as all of Odin’s other powers that Odinforce Thor did not display, and exclusive magic that comes with mastery of the Runes.