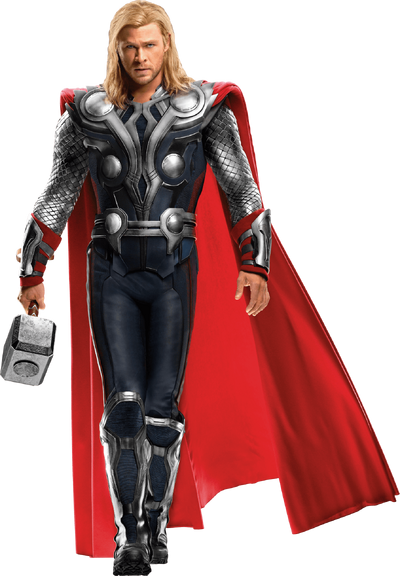 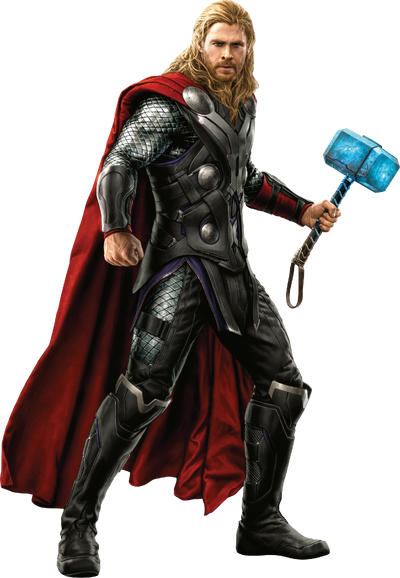 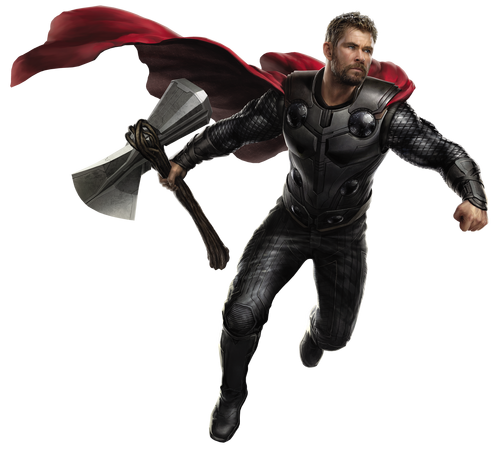 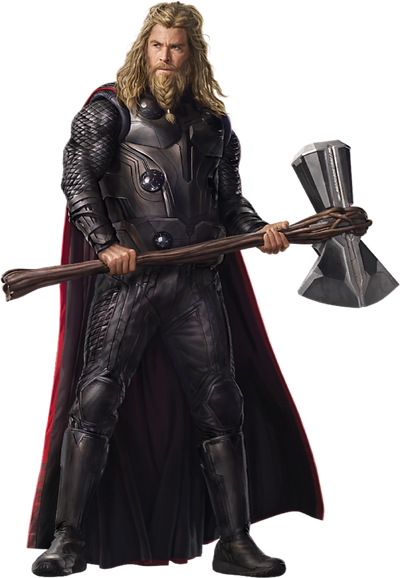 Thor Odinson is the prince of Asgard and a former member of the Avengers. When his irresponsible behavior threatened his homeland, he was stripped of his power and banished by his father Odin to Earth. While exiled on Earth, Thor learned humility, found love in Jane Foster, and helped to save his new friends from a destructive threat sent by his jealous adoptive brother Loki. In the process, Thor redeemed himself in the eyes of his father and was granted access to his power once more.

After being welcomed back to Asgard as a hero, Thor visited Earth to retrieve Loki, after Loki began his attempt to take over the world. He joined the Avengers and fought with them against the Chitauri during the Battle of New York, and further conflicts.

After Hela's assault on Asgard, he became the new king. However Thanos' invasion and the subsequent demise of half of the life of the universe caused him to fall into depression.

Five years later he joined the Avengers on their time heist to collect the Infinity Stones and fought Thanos, with Tony Stark sacrificing himself to save the universe.

Thor later officially joined the Guardians of the Galaxy after his final battle with Thanos, proclaiming Valkyrie to succeed him as the new ruler of the Asgardians.

Powers and Abilities: Peak Human Characteristics, Martial Arts | Superhuman Physical Characteristics, Self-Sustenance (Type 1), Weather Manipulation (Earthquakes, Storms, Rain, Tornados, Thunder and Lightning), Regeneration (Mid-Low. Regenerated from a stab by Gungnir and regenerated from multiple stabs by Hela's blades. Regenerated from third-degree burns almost instantaneously upon holding Stormbreaker), Longevity (Asgardians can live for 5000 years), Accelerated Healing (Instantly recovered from a fatal hit from The Destroyer when he got his powers back and multiple severe wounds from Hela when his true power was awakened), Martial Arts, Weapon Mastery, Master Acrobat, Armour Generation, Cloth Manipulation (Can conjure his regular outfit in place of preexisting clothes), Limited Telekinesis (Can control Mjolnir's trajectory mid-air with his mind), Limited Precognition (Had prophetic dreams and visions of Ragnarok), Flight (By swinging Mjolnir). Resistance to Extreme Heat, Cold, Radiation and limited Transmutation (Was unaffected by Malekith's dark matter storm). Extreme Pain Tolerance | Same powers as Base, Dimensional Travel (By channeling the Bifrost), True Flight (With Stormbreaker), pseudo-Telekinesis via electricity (Can use electricity to pick up and throw people)

Attack Potency: Wall level (Singlehandedly took down a squad of SHIELD agents. Shook a van when he bumped into it. Was considered by Hawkeye as a good match and was impressed by seeing him) | Large Town level (Should be comparable to his durability, which endured the explosion of Sokovia. Regularly creates powerful thunderstorms. Dented the Bifrost Bridge. Shook a mountain by just dropping Mjolnir on it ) | City level (Instantly covered Wakanda in a storm. Easily destroyed a portion of the Bifrost Bridge with lightning, which he earlier required 10 hits to destroy. Overpowered gladiator Hulk), far higher with Stormbreaker (Sliced through an Energy Blast powered by the Six Infinity Stones, and mortally wounded Thanos. Effortlessly decapitated Thanos afterward) | City level (Was still capable of briefly holding his own against Thanos. Stopped Thanos from killing him with Stormbreaker despite Thanos using both hands, although he was gradually being overpowered. Accidentally knocked out the Mark 85 Iron Man armor, which is superior to Mark 50, which in turn made Thanos slightly bleed), far higher with Stormbreaker and Mjolnir

Lifting Strength: Peak Human (Effortlessly carried Erik Selvig over his shoulder) | At least Class M (Effortlessly crushed the hand of Iron Man's Mark VI armor, and it should be noted that he was severely weakened at that time due to Odin's teleportation via dark matter. Comparable to the Hulk. Ripped out the spine of an Ultron Sentry, which should be greater than ripping out a human spine. Broke several of Surtur's chains, where Surtur's dragon broke one with extreme difficulty, the same dragon being able to cause earthquake-like tremors) | Class T (Nearly comparable to Hela. Moved the rings of Nidavellir) | Likely Class T (Can somehow wrestle with Thanos)

Durability: Wall level | Large Town level (Took hits from Hulk and Malekith. Withstood the destruction of Sokovia. Survived the shockwave created by Mjolnir hitting Captain America's shield, which levelled everything within a mile.  Withstood a blast from Gungir that sent him flying through multiple palace walls. Survived being rammed into the crystal shards of Bifrost by Hela while traveling at superluminal speeds) | City level (Withstood attacks from Hela. Survived an offscreen beating from Thanos and having his skull being burned by the Power Stone. Resisted Hela's blades multiple times, which can cut through Skurge's Uru armor) | City level (Endured a beating from Thanos)

Weaknesses: Standard human weaknesses | None notable | None notable | Can be pretty emotional, due to believing that it was his fault that Thanos won. Remains drunk and is overweight. However, he got sober by the end.