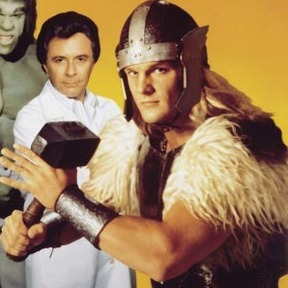 Thor Odinson had been a great Viking warrior and king. However, his arrogance, lead to Odin condemning him to never enter Valhalla, until he'd performed a series of tasks, to make up for his past.

In the 1980's, Thor's tomb was discovered by Dr. Donald Blake, who served as team doctor for a group of archaeologists. Blake picked up Thor's war hammer, which caused lightning to appear in the cave and Thor to appear.

Attack Potency: Wall level (Held his own against Hulk)

Speed: Normal Human (Shown to be rather slow, comparable to Hulk)

Weaknesses: Was said to be arrogant