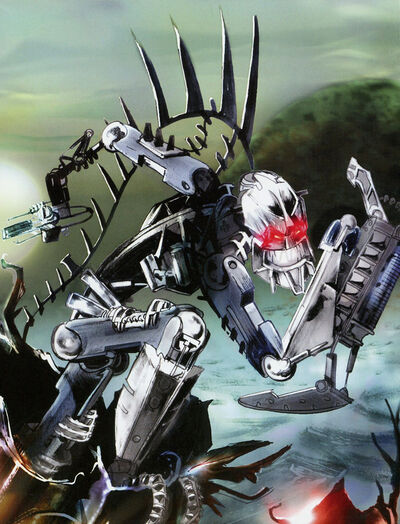 Thok is a member of the rogue group of Dark Hunters known as the Piraka. Solitary and cunning, he cleverly manipulates the other Piraka so that he can end up with the Legendary Mask of Life.

Powers and Abilities: Superhuman Physical Characteristics, Ice Manipulation (Only in the presence of other Skakdi, and with his Ice Gun), Mind Manipulation (Can enslave others with Zamor Spheres), Life Manipulation (can animate inanimate objects and make them fight for him), can disorient others on sight, Resistance to cold, Longevity

Attack Potency: City level+ (Can fight against the Toa Inika and Toa Nuva, such as Pohatu, who reduced Odina Fortress to dust) | Island level (Has absorbed the powers of Brutaka)

Lifting Strength: At least Class 1 (The average Toa is able to lift over 1 ton), likely at least Class 100 (Onua Nuva lifted a boulder, as have other Toa and beings on their level) | At least Class M (Should be comparable or greater in strength to Roodaka, who once ripped Krahka, in the form of a Troller, a giant Rahi who can fit a city block in its mouth, from the ground with a single hand), possibly higher (Brutaka claims to have uprooted mountains).

Range: Extended melee range, Kilometers with his abilities (His range should be comparable to a Toa's, such as Pohatu, who destroyed the massive Odina Fortress with a single timed Stone Blast)

Intelligence: Thok is intelligent, cunning, and manipulative, carefully manipulating the other Piraka to his advantage.

Weaknesses: Thok can only use his elemental powers when around other Skakdi. He's weak to intense heat.

Retrieved from "https://vsbattles.fandom.com/wiki/Thok?oldid=5735849"
Community content is available under CC-BY-SA unless otherwise noted.