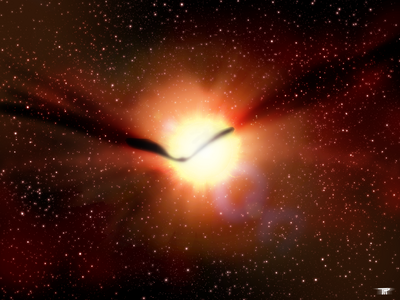 The Xeelee are a hyper-advanced species from Stephen Baxter's Xeelee Sequence. They were first remotely mentioned in the 1994 novel Timelike Infinity and were later central actors of several novels and a substantial number of short stories. Within the Xeelee Sequence, they are considered to be the most advanced of all Baryonic life-forms and posses technology and abilities far beyond other spacefaring civilizations. They have demonstrated the ability to routinely construct Closed Timelike Curves and have engineered their own evolution and history as far back as 20 billion years ago (within two hundred million years of the Big Bang)

Age: Dozens of Billions of years, although technically inapplicable

Attack Potency: At least Star level to Multi-Solar System level (Starbreakers can destabilize and destroy stars by just grazing them and can drill holes through neutron stars. They launch thousand+ light year long cosmic strings weighing around a hundred billion times more than a star at speeds greater than 0.5c to cut galaxies in half) | Galaxy level to Multi-Galaxy level for cosmic engineering projects (Galaxies are used as construction pieces for large scale projects such as The Ring), Universe level+ to Low Multiverse level (Created nested static universes which means universes which are infinite temporally and spatially which is embedded in another such universe) | Low Complex Multiverse level with best technology (Capable of altering the entire multiverse to suit their needs. Capable of Altering configuration space, which contains an uncountably infinite number of matter configurations of an uncountably infinite number of finitely sized 10-D universal domains, where the 7 extra spatial dimensions are compactified to a Planck scale. Eventually managed to defeat the Transcendence, although it had been weakened) | At least Low Complex Multiverse level, possibly higher with the Anti-Xeelee (Exists in a noncorporeal state beyond space and time across all Configuration Space and is able to manipulate the quantum wave functions of structures within it. Likely comparable, if not superior to The Transcendence in nature and function)

Industrial Capacity: Extremely High (The Xeelee can literally use space-time itself as a construction material)

Military Prowess: Individual Xeelee have merged with their own technology enough that any of them are capable of fighting. They have been at war with the Photino Birds since the beginning of time. However, they are relatively benevolent in the context of the verse and will even gift factions their own static universes should it mean they be on peaceful terms.

The Anti-Xeelee is a "living" mathematical quantum wave function, which means it can only be visualized as something akin to this 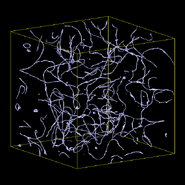 The Cosmic Strings launched by the Xeelee to destroy galaxies would look akin to this:

The Xeelee Ring, used to access other universes separate from Configuration Space

Bose-Einstein Condensate, what Xeelee Ships are made of
Add a photo to this gallery