VS Battles Wiki
Register
Don't have an account?
Sign In
in: Characters, DC Comics, Vertigo,
and 9 more 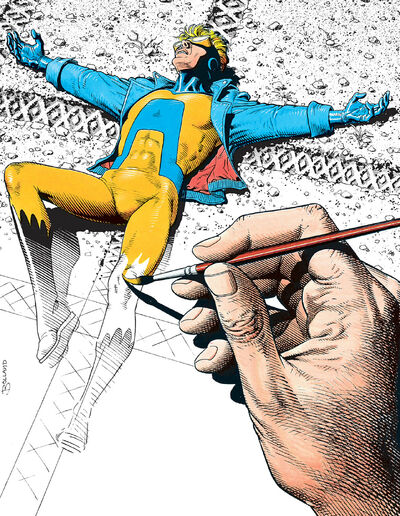 The Writer, also known as Grant Morrison, among numerous other names, is the representation of all DC Comics writers within the story.

Believed to be the entities which drew DC Comics on the blank page that is the Overmonitor, The Writers represent DC's true supreme beings. To him or her, reality and its inhabitants are just stories, characters that can be shaped into whatever they desire them to be, and should they become unsatisfied with the current state of creation, it can all be easily altered through a retcon.

Being completely beyond all stories and hierarchies within DC, The Writer is all-powerful and completely unknowable from the perspectives of their characters. Likewise, no character can comprehend the complete Writer, instead of only being capable of interacting with representations. Thus while multiple writers of differing ages, genders, and tastes may manifest in DC to interact with and affect their creations, they are all only aspects of a collective Writer responsible for all stories.

Attack Potency: At least High Outerverse level, likely Boundless (Wrote DC Comics in its entirety, and is transcendent over all of its characters and concepts, as they are all nothing but fiction from their perspective. Vastly above The Overvoid, seeing as it is just a sheet of paper from his/her perspective, and their will always exist beyond anything that can be drawn in it, with multiple layers of fiction within fiction representing the "Real World" being ultimately still fictional simulations of it and under the full control of the Writer)

Standard Equipment: Writing tools such as a computer, a typewriter, pencils, and paper

Notes: The reasoning behind this character's rating is this: Grant Morrison has stated in interviews that DC Comics was drawn on The Overmonitor against its will, by an entirely separate entity. The Overmonitor itself, in fact, is meant to be a representation of the blank page on which the comic is drawn.

Furthermore, Grant Morrison's Final Crisis and Multiversity hold a cosmology built around the duality between Reality and Fiction. There, it is shown that one universe's reality is another's fiction, and characters will often encounter and read their own comic books when traversing between the Multiverse. Likewise, the race of the Monitors are treated as the writers and editors of the entire Multiverse, but even them, alongside the totality of existence are but a microscopic inkblot on white canvas that is The Void.

Coupling all of this information with Grant Morrison's own Animal Man run, wherein the titular character encounters his writer, and learns that they are nothing but fiction, it becomes clear that, despite our general strong reservations for Reality - Fiction Interaction, The Writer is heavily intertwined with, and impossible to separate from DC Comics' fictional mythology. However, this profile should be taken as an exception, rather than a rule, regarding the convention.

Additionally, do not attempt to scale other characters that use a cosmology with Reality-Fiction Differences to High 1-A or 0 based on that they perceive lesser characters as fictional constructs or something similarly insignificant. The Monitor-Mind and the Writer are rated as such due to additional context regarding their natures that qualifies them for these tiers in the first place.

As such, perceiving 1-A characters as fiction should only be considered a higher degree of Outerverse level, unless there are further circumstances suggesting that a reality-fiction difference can be equated to higher tiers, in which case they should be carefully evaluated.