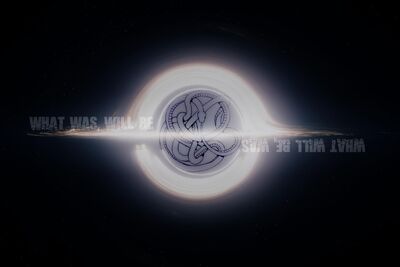 The Worm in waiting is a mysterious being from the strategy game Stellaris. Embodying the loop itself, it literally created itself through a series of paradoxes it is responsible for. It has been stated to have been waiting for all species since before they even existed, wanting to express "love", but love to the worm is completely different from how we understand the concept. The Worm desires to romantically "love" an entire species (And which species differs depending on game mechanics), and will essentially subject mortals to psychological torture just to be loved back. However its love is shown to be genuine (Such as when it literally writes beings love poems), in spite of its extremely unnatural methods of showing it.

Name: The worm in waiting, the worm, the end in the beginning, the loop, "god"

Gender: Non-Applicable in spite of its desire for romantic love

Age: Unquantifiable due to its paradoxical nature

Powers and Abilities: Superhuman Physical Characteristics, Higher-Dimensional Existence, Abstract Existence (Type 1. The worm is one with the loop itself), Reality Warping (Can bend reality in ways defying even hyper-advanced science), Spatial Manipulation, Time Manipulation (Has virtually absolute control over time), Gravity Manipulation, Conceptual Manipulation (Type 3, could affect time and gravity on an abstract level. Created itself and thus created "the loop"), Mind Manipulation (Its mere presence causes passive obedience to it that would defy how any mortal would normally act, although it can actively mind control others as well, can work on planets with billions of sentient beings at a time and effect those who resist mind control. This will not wear off over time.), Telepathy, Power Bestowal, Transmutation (Can change entire planets into habitable ones, even ones not remotely habitable like Venus), Causality Manipulation (Can separate beings from normal causality, and rewrite history ignoring paradoxes), Technology Manipulation, Black Hole Manipulation, Extrasensory Perception (Can "see" through time itself), Summoning (If its offer is rejected, it will not attack directly, but summon a dimensional horror to fight), Portal Creation, Immortality (Types 1, 5, and 8), Dream Manipulation (Can cause planet wide nightmares), Time Travel, Non-Corporeal, Non-Physical Interaction, Possible Soul Manipulation (Can possibly interact with "spirits" due to the worm having some degree of understanding about psionics) Law Manipulation (Has control over the "operations of the universe". Can make it so planets orbiting black holes are completely habitable, which even in game is completely impossible), Biological Manipulation (Can overwrite the biology of an entire species with trillions of members), Acausality (Type 4, The Worm is the "cause" of its own "effect", exists as a living temporal anomaly, and is implied to experience causality backwards), Precognition (Can predict and react to future events. It was implied to have known when all species including humans would first come into existence, however, there are several things that can apparently catch the worm off guard), potentially others, Resistance to Mind Manipulation and Space-Time Manipulation

Attack Potency: At least Universe level+ (Stated twice to exist outside of space-time, "outside time and beneath space" as well as "came in through the boundary fences of spacetime". Furthermore if time was a labyrinth, the worm is its maker, although it is unknown if this refers to more than one universe or not)

Speed: Immeasurable (The worm exists "outside time and beneath space" as well as "came in through the boundary fences of spacetime")

Intelligence: Supergenius. Comprehends hyperadvanced technology and is smarter than beings literally genetically modified to be as intelligent as possible, can see all of time in at least one universe.

Weaknesses: Extremely desperate for, and primarily wants, to be loved in a romantic sense.

Start a Discussion Discussions about The Worm in Waiting