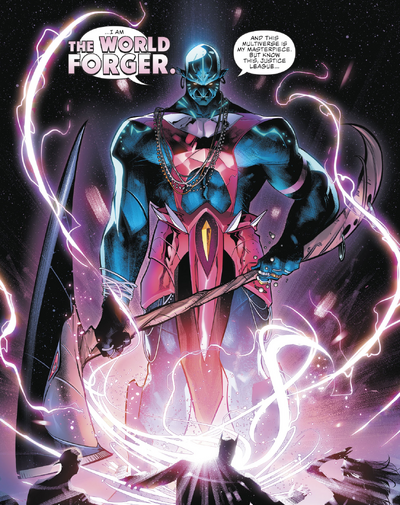 The World Forger, real name Alpheus, is one of the three sons of Perpetua, created when she tore pieces from the Overvoid to shape into her children. He existed before the first version of the DC Multiverse was finished being created, and was made in order to populate the Orrery with universes, working in the World Forge within the Dark Multiverse.

Age: 20 billion years from the perspective of the multiverse; exists completely beyond time

Superhuman Physical Characteristics, Genius Intelligence, Immortality (Types 1 and 4), Creation and Conceptual Manipulation (Makes universes by creating form from idea and hammering everything into existence which contain entities like Nekron, the Life Entity and the New Gods; Created Barbatos), Physics Manipulation (Writes the rules for each reality he makes), Higher-Dimensional Manipulation (Created Hypertime), Space-Time Manipulation and Life Manipulation (Uses the Crisis Anvil to replace realities destroyed in Crises with new versions, transferring the life energies of those with a place in the new version of existence), Energy Manipulation (Altered Mxyzptlk's portal to allow the Justice League to go through; Can redirect universal energy), Life Force Absorption (Can absorb life force), Telepathy (Contacted Mxyzptlk from the Sixth Dimension), Mind Manipulation (Forced his way past Martian Manhunter's psychic defenses and held the League's minds captive; Could have ripped the League's minds apart and reshaped them), Illusion Creation (Can make images of light), Shapeshifting (Can transform by recreating others forms cell by cell), Teleportation (Can teleport himself and others), BFR (Can forcefully send others across dimensions), Law Manipulation (Wields the Dimensional Superstructure, which governs all things imaginable and unimaginable), Portal Creation (Can create portals), Empathic Manipulation (Can read feelings), Precognition (Can see every future possibilities), Limited Fusionism (Merged with his brothers), Enhanced Senses (Has sensed Perpetua launching a planet from Earth-44)

Resistance to Telepathy (Disguised his real mind from Martian Manhunter), Antimatter Manipulation (He and his brothers can avoid being destroyed by antimatter)

Attack Potency: Multiverse level+ (Should be comparable to the Monitor and Anti-Monitor. He contains the energy of the Dark Multiverse, but lacks the power to shape it.) | Outerverse level (Is a direct fragment of the Overvoid, created by tearing a piece of it from the whole, Exist in the Sixth Dimension, a timeless realm beyond imagination and is at the top of everything even the Source Wall, Created a future version of the current Multiverse with its own version of the New Gods, Life Entity and its own Hypertime. Created the current Hypertime with his own hands.)

Speed: Massively FTL+ (Should be comparable to the Monitor and Anti-Monitor) | Irrelevant

Durability: Multiverse level+ (Should be equal to his own power) | Outerverse level

Stamina: Likely infinite (Should be comparable to his brothers, Mar Novu and Mobius)

Intelligence: Likely Supergenius (Is intelligent enough to properly create all the laws of physics and rules of reality when making new universes)

Weaknesses: The World Forger needs his hammer to forge things into existence and if weakened to the point he cannot strike his hammer with enough might to spark creation, the World Forger cannot create either unless he finds an alternative.

Start a Discussion Discussions about The World Forger