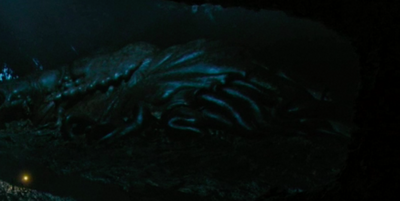 The Wilberforces are an alien race from a far-distant star. Their true name is unpronounceable, but it roughly translates to "The People who Conquer and Multiply". True to their name, they expanded, destroying and assimilating a quarter of our galaxy before they were stopped by another race, who pushed themselves to extinction stopping the Wilberforces inexorable advance.

Now seven of them stir under Auckland's dormant volcanoes. They are breaking out of the spell that trapped them for so many billions of years. Their goal is the assimilation of the universe.

Civilization Type: Interstellar Civilisation, baseline Galactic Civilisation (At their prime, the Wilberforces had conquered a quarter of the Milky Way)

Name: The Wilberforces, The People who Conquer and Multiply

Origin: Under The Mountain

Age: Billions of years (predates all life on Earth by a indescribable amount)

Territory: A quarter of the Milky Way

Technology/Abilities: Superhuman Physical Characteristics, Longevity, possibly Immortality (Type 1)  (A single Wilberforce has lived for billions of years), Elasticity (A Wilberforce can mould it's body into impossible shapes, and is even able to emulate Shapeshifting), Acid Manipulation (Created the tunnels under their house by coating their bodies with a potent acid), limited Possession (A basic Wilberforce can possess a worm to vastly amp it's power), Telepathy (Can 'pebble', same as the Jones' and redheaded humans), Non-Physical Interaction (Could wage war against the Jones', who can turn themselves into unquenchable fire), Resistance to Heat Manipulation (The Jones' fire couldn't burn them) and Radiation Manipulation (Mr. Jones stated that the Wilberforces would be immune to nuclear strikes) | All previous including Large Size (Type 3), Invulnerability (The Jones', who possessed the power to destroy stars, considers their skin impenetrable by any means), Self-Destruction (Upon death, the Worms explode catastrophically with enough force to set off volcanoes), Matter Manipulation (Their skin turns regular matter into the mud of their home world) and Resistance to Mind Manipulation (The Worms are completely mindless, to the point where the Wilberforces have to act as their brains) | All previous including Spaceflight

Attack Potency: Wall level (Destroyed a motorboat and smashed down a door. Vastly superior to any human) | City Block level (Via sheer size. The group of seven worms was implied to have been able to easily destroy the world), with Mountain level death (Killing a Worm released enough energy to cause the extinct volcanos Rangitoto and Lake Pupuke to erupt and collapsed Mount Eden) | Solar System level (At their peak, the Wilberforces could destroy entire star systems at once)

Power Source: Through an unknown process, the mud that the Worms produce is repurposed as a power source

Industrial Capacity: Once terraforming a planet, they can produce hundreds to thousands of Worms a day

Military Prowess: Hundreds of millions of Wilberforces, trillions of Worms, tens of thousands of starships

Weaknesses: The Jones stones are easily able to kill them | The Worms are mindless and harmless without a Wilberforce to control them. Can also easily be sealed and trapped. Magically binding a small cluster of cells, as little as ten, is enough to trap the entire creature

Note: This profile is about the novel Wilberforces, not their film adaptation

Retrieved from "https://vsbattles.fandom.com/wiki/The_Wilberforces?oldid=5675346"
Community content is available under CC-BY-SA unless otherwise noted.