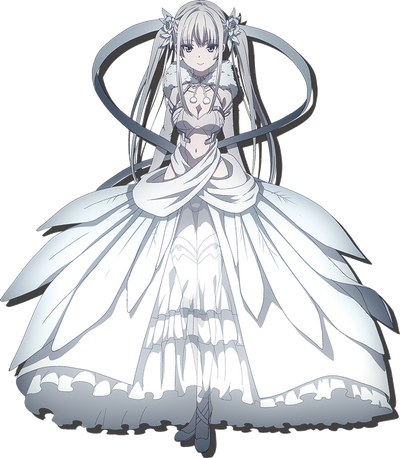 The White Queen is an Unexplored-class Material, one of the beings who lurk beyond the gods in the other world. An incarnation of benevolence, the anthropomorphism of radiance, a symbol of sanctity, holiness, justice, strength, beauty, righteousness, etc; the White Queen is at the peak of the Unexplored-class, being the strongest Material by far and ruling over the other side's denizens. Every summoner has heard from her, and many desire to summon her. Some even pray to her as a god. Her summoning cost is 21, and she doesn't have a sound range.

In the past, the White Queen was close with Shiroyama Kyousuke, who was part of a project intended to summon her and find a way to kill her. He devised a way to bind and summon a Material to the world indefinitely. However, this caused the greatest tragedy in history, and countless summoners and vessels died in a secret war to stop the White Queen from destroying the world. To this day, the White Queen remains obsessed with getting Kyousuke back no matter what.

Attack Potency: At least Solar System level (The Sword of Truth alone could produce something on the level of a supernova or a black hole that swallows the entire solar system, and the Queen herself is a lot more powerful than it), possibly Galaxy level (Was stated to be powerful enough to destroy the entire galaxy), ignores conventional durability with normal attacks | At least Solar System level, possibly Galaxy level (Much stronger than when she's restrained by the Blood-Sign system, fought against a coalition of hundreds, if not thousands, of Unexplored-class Materials), ignores conventional durability with normal attacks

Speed: At least Subsonic (Easily exceeds human kinetic vision while playing around, Divine-class Materials have no chance of defending from or dodging her attacks and she can blitz other Unexplored-class Materials, had a tough close fight with the Black Maw that only lasted a few seconds and that Shiroyama Kyousuke could not follow with his eyes), likely at least Supersonic (Stated to be able to rival a stealth fighter in flight), FTL+ ranged attacks (Manipulated the sun to launch an attack from it to the moon within a short timeframe)

Lifting Strength: At least Class 10, likely much higher (Even the Original Series, the weakest Materials, can flip over a military armored truck)

Range: Interplanetary (Can attacks the moon from the sun), possibly Galactic

Intelligence: High. She has managed to trick and manipulate expert summoners and geniuses who are aware of her malicious nature and power, including Kyousuke Shiroyama, on multiple occasions. She has knowledge and trivia in multiple fields, from anime to horror films and medicine. In fact, she's stated to be a cut above anyone else in the world in any field, though so far she has only demonstrated this in hand-to-hand/martial arts skill and she is so confident in her raw power that she rarely uses it. If her own knowledge doesn't suffice she can ask questions to Wisdom, who acts as her search engine and constantly absorbs all forms of knowledge in real time. She can easily process large quantities of compressed information that cause pain to and might even destroy normal human brains.

Weaknesses: Very arrogant, Has a weak spot in her body that is very fragile and unsummons her when it is hit | Very arrogant

Start a Discussion Discussions about The White Queen (Blood Sign)