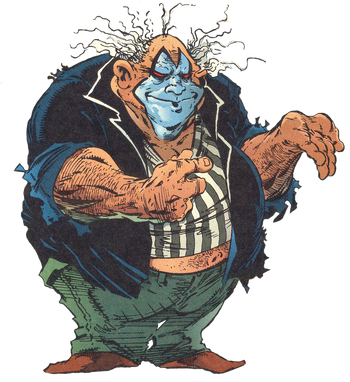 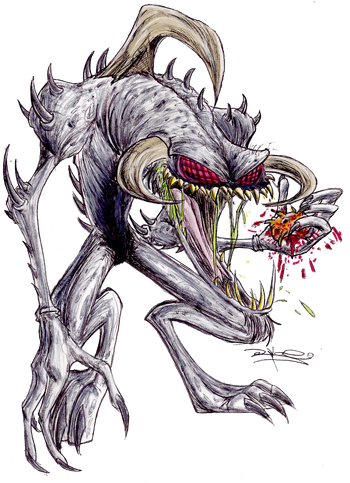 An 800-year old demon from the 8th sphere of hell. The oldest of the 5 Phlebiac brothers. Sent to Earth's surface to become a guide to the newest Hellspawn, Al Simmons. Needless to say, they don't see eye to eye and Violator and Spawn have become bitter rivals. He is the most recurring member of Spawn's rogues gallery.

Violator views humanity as weak and so asserts that demons should lead the armies of Hell, not Spawn. Accordingly, much of his terrestrial activities, sanctioned by Hell or not, are aimed at proving his superiority to his master, Malebolgia. The Violator is not a demon to be taken lightly: he has shown many times that he is more than a match for a young Hellspawn. His hands are tied by his role, though, as he cannot kill a Spawn without an order from his superiors.

His role is not to kill the Hellspawn, but to weaken them and cause them to waste their powers in wreaking havoc, something he did in medieval times, where he was known and kept as a legend as "the first dragon". His chief purpose is to groom and prepare the young Hellspawn for their service in Satan's army. Violator is a superhumanly strong and resilient demon who has various supernatural powers including, shape/size shifting, regeneration, telepathy, possession of others, the ability to breathe fire, teleportation, and necromancy. It is also stated that he is incapable of experiencing pain.

Needless to say, Violator is a sick creature.

Tier: At least 4-B, possibly higher

Attack Potency: At least Solar System level (Regularly competes with Spawn, even when he's at a great disadvantage), possibly higher (Survived a battle against Omega Spawn, who dwarfs the power of entire hellspawn armies, and is capable of one-shotting other hellspawn with his fire breath according to himself)

Durability: At least Solar System level, possibly higher (Has tanked attacks from Spawn and others stronger than himself)

Range: Several meters due to size, higher through magic and other attacks

Intelligence: At least Above Average (In spite of his deranged mind, he is an excellent strategist with hundreds of years of experience and it goes to show. He was able to control a considerable portion of New York City at the same time)

Start a Discussion Discussions about The Violator