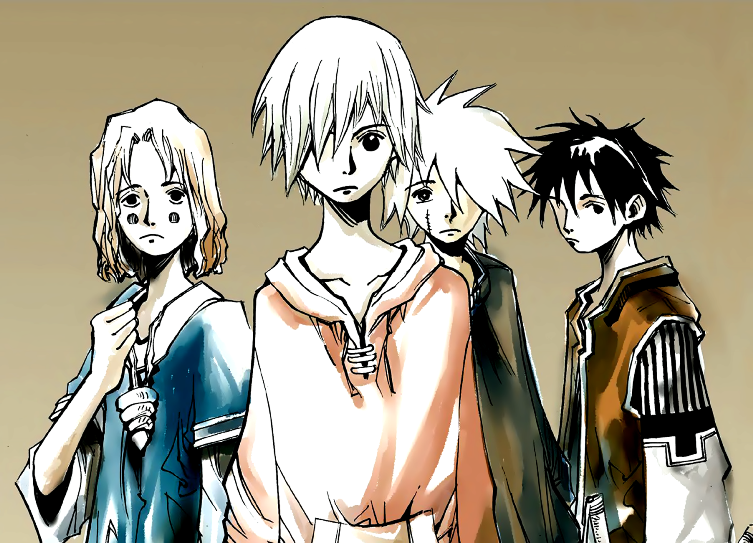 Vagrant Soldier Ares (떠돌이 용병 아레스) is a Korean manhwa written and drawn by Ryu Kum-chel. The story centers on young swordsman Ares and takes place in a world similar to Ancient Rome. This manhwa is noted for its fluid action sequences and subtle anachronism.

The world of Ares is similar to Ancient Rome and shares important names with that history. The protagonists belong to or ally with the central country of Chronos. Daraak and the Radnik Alliance flank Chronos' western border, Isiris flanks its southern border, Silonica flanks its eastern border, and the island nation of Minos is off its northern coast.

Ares and Mikael are admitted to Temple Mercenaries after a test of skill against B-rank soldiers. Both pass easily and find themselves assigned to the same unit. Baroona and Gohue join them. Ares and Mikael wield swords, Baroona – another strong fighter – uses two linked daggers, and the cowardly artist Gohue provides comic relief.

The king of Chronos has neglected his duties, and neighboring states contemplate invasion. Temple Mercenaries are hired by Chronosian general Icarus for a pre-emptive attack against Minos in cooperation with their ally, Silonica. There, the four meet Ariadne, Ares´ future girlfriend, and her bodyguard, the young, able Helena. During the invasion, Ares protects Ariadne, winning the respect of the initially antagonistic Helena. Mikael and Baroona attract the attention of Icarus when Mikael defeats General Kentaro, a champion of Minos.

The battle strategies of Icarus win against Minos, and he is sent to negotiate with the Radnik Alliance, a consortium of countries at Chronos' western border. Icarus knows he is being sent to his death while rivals plot wresting power from the weak King. His own troops are detained on other duties, and he must travel with different escort. Icarus does not trust the replacement troops, and he hires Mikael and Baroona as personal bodyguards. Mikael and Baroona recommend Ares and Gohue as well. The leader of the Radnik alliance has red eyes, similar to a dark figure in Ares' past, and Ares confronts him. They survive this encounter, retreat, and Mikael, Baroona, and Ares defeat an ambush staged by the traitorous replacement troops.

They return to the capital to find Icarus declared dead and usurpers persecuting those loyal to the old king and Icarus. Icarus stops the civil war with notably minimal losses. He declines then accepts the offered kingship of Chronos and turns his attention to the Radnik Alliance. He wins against their greater numbers with greater strategy and the further commission of Temple Mercenaries. Ares and Mikael pursue and defeat the red-eyed leader but discover he is older brother to the man Ares seeks – Kirberos, the man who killed Ares' master. Kirberos shows himself but only to taunt Ares to make himself "worthy to kill".

Soon afterwards, Mikael receives word from his family, and he resigns from Temple Mercenaries to return home. Ares, Baroona and Gohue give their comrade a fond farewell. Baroona overheard the truth of Mikael's royal lineage, but neither Mikael nor the others know this.

Mikael is the prince of Isiris, his father is on his deathbed, and his uncle has started a coup. Mikael stops the coup, kills his uncle then considers what he will do next. He remembers the appeal of Chronos and decides to take it and then the world. Afterwards Mikael ruthlessly kills the Temple Mercenaries and puts Ares into a state of shock. Gohu takes Ares to Ariadne to see if she can break Ares out of the shock.

Start a Discussion Discussions about The Vagrant Soldier Ares