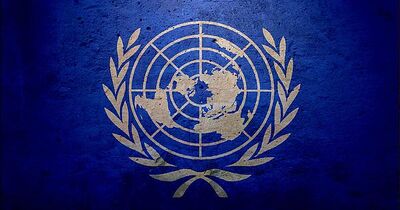 The myriad Human nations that constitute their interstellar government are disparate, yet united in purpose. These bipedal mammalians have developed a society that encourages and even thrives on individual freedoms and cultural differences - as a result, humans tend to integrate well with alien populations.

Despite this, they have strong martial traditions (produced by millennia of intermittent warfare on their homeworld) and their sometimes aggressive and unpredictable nature should not be underestimated.

Name: The United Nations of Earth

Classification: Future version of the United Nations that turned into an actual government

Territory: A large section of the galaxy

Technology/Abilities: Spaceflight, Energy Manipulation, Regeneration (Mid-Low) | Telepathy, Reality Warping, Mind Manipulation, and Precognition (Via psionic ascension. This has been compared to Magic in verse, but this is likely a metaphor), Durability Negation, Biological Manipulation, Matter Manipulation (Via matter generator, which converts pure energy into matter), Morality Manipulation (Via orbital mind control laser and leaders with the chosen one trait, leaders with the chosen one trait passively cause obedience to all creatures within the UNE's borders on an interstellar scale), Sealing (Via global pacifier which traps a planet in an "indestricble" force field), Immortality (Type 1; for the leaders if they have chosen one trait), Energy Absorption, Jump drives bend the fabric of space to instantly travel to a location, Quantum Manipulation (Certain weapons attack on a quantum level) Portal Creation (Via making gateways), Forcefield Creation (For planetary shields), Tachyon Sensors that can "see" through black holes and light years away, Homing Attack, Danmaku, Limited Astral Projection (Only usable for entering the shroud), Non-Physical Interaction (Can hurt non-corporeal entities like The Spectral Wraith), Limited Higher-Dimensional Manipulation (Gained from either researching killed Unbidden, or making a deal with The End of The Cycle), Can block off FTL travel, Anti-Matter Weapons and Power, Attack Reflection (With various deflectors) Physics Manipulation, Creation (Using zero point energy, they can draw energy from absolutely nothing, and use matter generators to turn this energy into matter, etc) If they make a deal with the worm in waiting, they gain Acausality (Type 1), Poweful psionics have Resistance to Time Manipulation and Conceptual Manipulation (A powerful enough Psionic could move in a section of the throud in which time, on a conceptual level, doesen't even exist, and use it to see into the future)

Attack Potency: At least Town level to City level (Utilise nuclear weapons for ships) | Unknown (The exact powers of individual soldiers and ships is unknown). Large Star level with enough firepower (In groups, can take down leviathans like the dimensional horror) | Planet level (Late game ships can trade blows with Prethoryn and Unbidden ships, and blow up entire planets. Can ignore conventional durability with several weapons), up to at least Large Star level with enough firepower (Much stronger than before)

Industrial Capacity: Absurdly high. Can produce matter from nothing, build hyper-advanced technology in a couple of weeks, etc

Start a Discussion Discussions about The United Nations of Earth