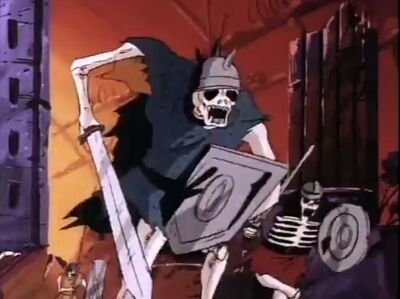 The Undead Army are antagonists of the Inhumanoids cartoon series. The Undead Army were once normal people that lived during the medieval times, they were turned into undead minions of D'Compose and forced to build his kingdom known as Skellweb. The few times the Undead Army is seen throughout the show they are usually fighting against the Earth Corps and the Granites.

Gender: Consist of both Males and Females

Age: Have been around for at least hundreds of years

Classification: The Undead minions of D'Compose

Attack Potency: Wall level (Can easily fight against, damage, and even destroy The Granites.)

Durability: Wall level (Can survive casual attacks from The Granites.)

Intelligence: Below average. Somewhat mindless, they mainly just know how to take orders from D’Compose. Some are still capable of basic speech.

Weaknesses: Sunlight will revert them back into their normal selves.

Retrieved from "https://vsbattles.fandom.com/wiki/The_Undead_Army?oldid=5516200"
Community content is available under CC-BY-SA unless otherwise noted.