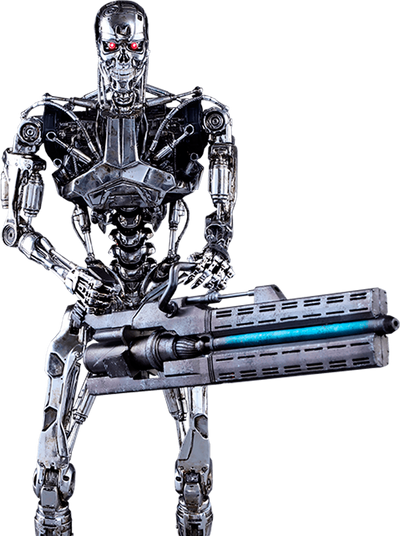 The Cyberdyne Systems Model 101 Series 800 Terminator was sent by Skynet in 2029 to Los Angeles in 1984 to kill Sarah Connor, the future mother of John Connor, the leader of the future human Resistance. It was the first of the Infiltrators sent back on assassination missions by Skynet and is arguably the single most significant Terminator unit as it inadvertently "fathered" Skynet in its journey through time, similar to how Kyle Reese fathered John Connor in his.

Gender: None (Male by appearance)

Powers and Abilities: Superhuman Physical Characteristics, Combat Abilities, Self-Sustenance (Type 3), Inorganic Physiology (Type 2), Master in the use of all kinds of weapons, Vehicular Mastery, Enhanced Senses (Can hear through a soundproof room. Its hud has a compass, targeting systems, can see in infrared, see through one-sided mirrors, and can detect polyalloy), Electricity Manipulation Resistance, Heat Manipulation Resistance, Acid Manipulation Resistance | All previous abilities Enhanced plus Regeneration (Low-High), Can hear gunshots miles away, Has an audio wave in its HUD, Technology Manipulation, Resistance (Reboots itself to override the T-X's control of it) | All the previous abilities Enhanced, EMPs do nothing,X-Ray vision, Flight, with helicopter packs ,Can emit EMPs, Longevity

Speed: Superhuman (Above approximately 40 km/hour) with Subsonic Movement (Managed to sneak out of a car being surrounded by police and none of them saw him get out) and possibly Supersonic reactions (Caught a bullet with his teeth point-blank)

Lifting Strength: Likely Class 25 (Far stronger than a T-600 and ripped one in half effortlessly. Keeps a bus from falling over a bridge) | At least Class 25, likely higher (Held a blast door open with one hand) | Class 25 (Held up a bus with one hand)

Durability: Small Building level (Was in a massive semi-truck explosion and only its flesh was burned away. Was rammed against a divider and ran over by a semi-truck and only received a limp and some optical damage. Was shot 10 times by an Ithaca 37 shotgun and was only momentarily knocked down. A car fuel tank exploding right next to it does no damage to it. A high-speed car crash only jammed its forearm, which it easily repaired) | At least Small Building level (Increased durability) | At least Large Building level+ (Can withstand physical blows from other T-800's, 1000's, and the T-X), Regeneration makes it very hard to kill (got reactivated by the T-1000)

Stamina: Virtually limitless (As a robot, the T-800 can operate continuously on a single power cell for 120 years. Can function with the lower body blown off)

Intelligence: Normally, a T-800's learning aptitude is restricted, but when set to "write" instead of "read" mode, they can adapt to and develop almost human personalities. They are also able to quickly adapt to and use technology/weapons/vehicles. Can Identify targets. Can scan the environment to use it to its advantage. Can scan for vulnerabilities. Can identify vehicle models. Can predict actions. It can also repair itself. Can reroute power to reactivate itself. Knows how to start a car by manually turning the ignition

Weaknesses: Water, the Terminators cannot swim. Its sensors can be distracted if there is a high amount of technological and mechanical actions in their area | Similar weaknesses to the T-1000

The Heavy (Team Fortress) The Heavy's Profile (T-800 was used)

The Thing (John Carpenter's The Thing) The Thing's Profile (9-A Terminator was used, Speed was equalized, The Thing had assimilated 10 people, and the Fight took place in New York)

Start a Discussion Discussions about The Terminator (T-800)