The Terminator T-800 from “Terminator: Dark Fate” is a cyborg assassin, sent back in time from a post-apocalyptic future. He is nearly indestructible and possesses superior technology, fighting skills and artificial intelligence making him the ultimate killing machine.

Name: T-800, The Terminator, has several titles including Skynet's Scourge, The Destroyer

Gender: None (Male by appearance)

Attack Potency: Large Building level (His shotgun can explode lesser kombatants such as Jax. Singlehandedly killed off Shao Kahn's army), ignores durability with Time Displacement Equipment (The T.D.E. will only transport objects that are inside the sphere, leaving behind anything that is outside of it such as protruding limbs)

Speed: Superhuman with Supersonic+ reactions and combat speed (Can dash up to opponents that were sent flying by his shotgun blasts. Wields weapons such as SMGs which should reach this speeds)

Intelligence: Genius (The T-800 is equipped with Skynet's state of the art learning computer loaded with detailed files on human anatomy, many martial arts and its previous battle experiences making it an efficient killer. Shortly after his arrival to the MK universe, it was able to quickly adapt to its surroundings by destroying Shao's army by itself, utilizing its portable Time Displacement Equipment as weapons and was able to unlock the Hourglass' secrets to operating it and used it to its full potential, restarting the timeline for many times until he realized his mistake. However, The Terminator seems to be quite an airhead when he is given info that is not familiar with him, mistaking the Lin Kuei assassin clan for an actual person, even going as far as to call it a person named "Lynn Quay")

Weaknesses: Intro dialogues suggest that it is possible for it to be reprogrammed, making him oblivious to whatever the opponent will do to him. 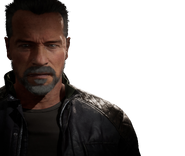 Start a Discussion Discussions about The Terminator (Mortal Kombat)