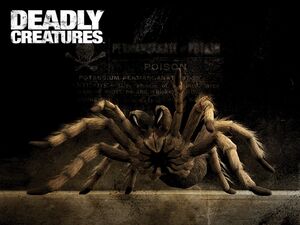 The Tarantula is one of the two playable protagonist on the Wii game, Deadly Creatures. While her origins are unknown, she is shown to have a grudge or vendetta against the other protagonist, The Scorpion. This is shown in their hostility for each other, constant chasing or attacking one another on sight. The Tarantula's motivation aside from that is unknown, though she seems to willingly kill and eat everything in her path (even when it isn't required).

Powers and Abilities: Small Size (Type 2), Superhuman Speed, Poison Manipulation (Drains opponents health over time), Stealth Mastery (Used to sneak up on opponents. Shown useful against various insects), Web Projection (As a strand or a blinding shot), Skilled in Close Quarters Combat, Acrobatics, Enhanced Senses, Surface Scaling (as shown here, even able to jump on them), Regeneration (Mid-Low) and Healing (Via eating and biting opponents), Resistance to Poisons (Is ineffective by the poisons of scorpions and wasps, barely effected by bites from crimson and black widows), Toxins (Mostly unaffected by the attacks of the toxic beetles), and possibly Pain (Arachnids possibly can't feel pain)

Speed: At least Normal Human (Is faster than lizards, rats, and wasps. Dodges attacks from the Scorpion, who is of comparable speed to Stuggs, a human), Superhuman reactions (Dodges rattlesnake strikes, which is around this level)

Lifting Strength: At least Below Average Human (Can easily beat around and throw enemies like spiders, large rats, and lizards. Tore through webs that easily contained and restrained lizards. Can quickly tear through opponent's web attacks)

Striking Strength: At least Below Average Class (Comparable to the Scorpion, who can easily dig through dirt and even stone to bury himself and can destroy relatively large dirt walls and plants)

Durability: Below Average Human level (Takes hits from the Scorpion, various enemies, and survives relatively high falls. Tanks rattlesnake strikes multiple times, said snake being able to knock its terrarium off a self with a strike and knock over filled oil cans), likely Human level (Comparable to the Scorpion who can survive being stomped on by an angry overweight man, Struggs, multiple times with little to no damage. Survived being near a large explosion, though exact distance is unknown)

Stamina: High (Fought multiple hoards of enemies for an entire day without getting tired)

Intelligence: High Animalistic (Aside from skill in combat, The Tarantula has been shown tricking opponents into harming themselves or giving her an opening to attack. Comparable to the Scorpion)

Start a Discussion Discussions about The Tarantula