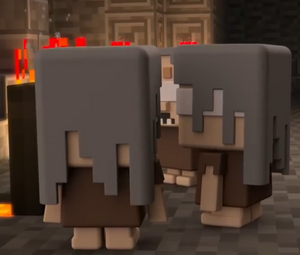 The three Stygian Witches are a group of three women who can predict the future and have a taste for human flesh.

Speed: Normal Human with likely Subsonic combat and reaction speed (Could keep up with the players, though the players could avoid their attacks)

Intelligence: At least Average, much higher with precognition

Weaknesses: The bandages covering their eyes prevent them from seeing what's going on in the present

Retrieved from "https://vsbattles.fandom.com/wiki/The_Stygian_Witches_(Minecraft_Mini)?oldid=6823609"
Community content is available under CC-BY-SA unless otherwise noted.