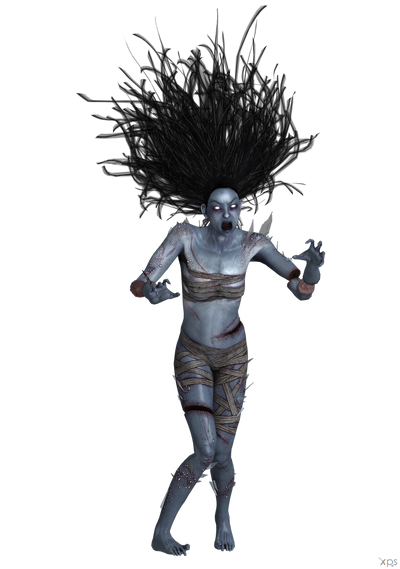 Rin Yamaoka was the only child of the Yamaoka family. She was raised in the dusty halls of a traditional house in Kagawa. She studied Education at Takamatsu, a private university, which weighed heavily on her family's shaky finances. Her mother got ill that year and the bills started piling up. Rin worked part-time in a futile attempt to help lighten the load.

This all played a heavy toll on Rin's father, who suffered the misfortune of being blamed for the defective production line that resulted in the loss of his job after he had laid trust in his superior. Something in him snapped that night that caused him to take the life of his wife and make an attempted assassination of his daughter who had just witnessed the spectacle after returning home.

As she laid on the floor covered in her blood she sought revenge at any cost, a rage that The Entity saw interest in. In the darkness it whispered to her, it promised her blood and the revenge she sought.

Right there, an oath was made and Rin closed her eyes.

Age: Unknown, presumably in her teens before she died

Powers and Abilities: Superhuman Physical Characteristics, Weapon Mastery, passive Fear Aura via The Heartbeat (The very presence of a killer is enough to incite panic, severe anxiety, and terror. Amplified through proximity.), Stealth Mastery (The Killers possess natural stalking ability and can mask The Heartbeat), Enhanced Senses (A Killer's senses are so acute that they can detect minor disturbances in terrain as a trail to their target alongside their ability to detect the smell of blood and sound of breathing from great distances), Extrasensory Perception (Killers are able to see the auras of those bleeding out or attempting to heal their wounds), Immortality (Types 1, 2, 7 & 8; Killers have an importance of collecting food for The Entity, and will be resurrected by it should they be killed), Berserk Mode and Speed Boost (should the lust for the kill become too great, the Entity's connection to the Killer will be cut off, making them unpredictable), Blessed (The Entity favors the Killer's and will aid through indirect means should it be beneficial), Empowerment (via No One Escapes Death; the attacks motivated through this hex are more lethal, making strikes that would only injure become critically lethal), Summoning (via Hooking; exists as a sacrificial ritual to The Entity, awakening it to take the soul of the victim. As well, Cruel Limits, Thrilling Tremors, and Corrupt Intervention among others all summon the spikes and arms of the entity to meddle with generators and block off escapes), Status Effect Inducement (Hemorrhage and Mangled; provokes intense bleeding and slows down the process of healing respectively), Technology Manipulation (Surge, among other perks meddle with nearby technology. Surge, specifically, is said to charge the air and mess with tech), Statistics Reduction (Mindbreaker claims that “your distressing presence drains and weakens your prey” and “can evoke feelings of dread and fatigue in nearby individuals,” alongside causing exhaustion in-game), minor Perception Manipulation (via Huntress Lullaby; those who are hooked find their perceptions muddled), Power Nullification (via The Third Seal; negates Extrasensory Perception through the Blindness effect), Resistance to Pain (Enduring) and Blinding (Lightborn), Intangibility and Afterimage Creation (Rin's body passively phases in and out of the Spirit World, causing her to leave behind still images that confuse her victims), Yamaoka's Haunting (Astral Projection, Dimensional Travel), possible Regeneration (Low-Godly; Whenever Rin enters the Spirit World she leaves behind her physical body as a husk, should she re-enter the physical plane this husk withers away wherever it was left and she seemingly creates a new body), Self-Sustenance (Types 1, 2 & 3)

Attack Potency: Wall level (Comparable to The Nurse, who could casually destroy barricades by poking them)

Speed: Superhuman (Killers possess the speed to outpace trained athletes in a fearful run by simply walking after them), higher via Yamaoka's Haunting

Stamina: Limitless (As a spirit, Rin should be incapable of tiring)

Intelligence: Above Average (In her life, Rin was a student studying at a prestigious university, this assumes at least some degree of intellect)

Weaknesses: Killers are servants of the Entity, making them more prone to preserve their prey first in an attempt to sacrifice them. The Stain is an indication of where killers are looking, making their line of sight more exploitable. During Yamaoka's Haunting, Rin's perceptions are inhibited and prevent her from seeing her targets, but rather the marks they leave in the physical plane only.

Schoolgirl outfit
Add a photo to this gallery

Retrieved from "https://vsbattles.fandom.com/wiki/The_Spirit?oldid=5707303"
Community content is available under CC-BY-SA unless otherwise noted.