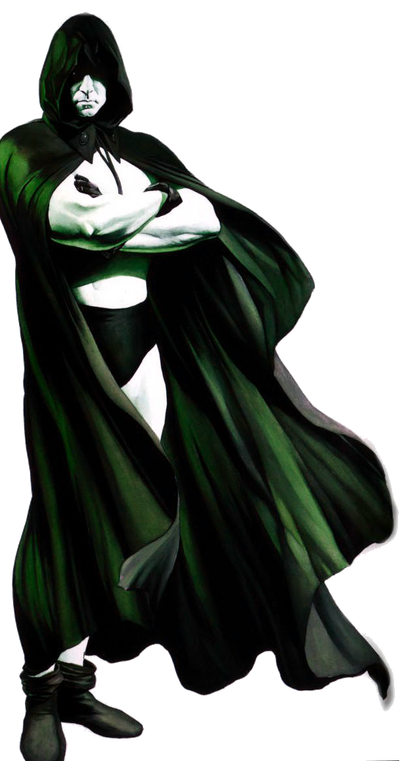 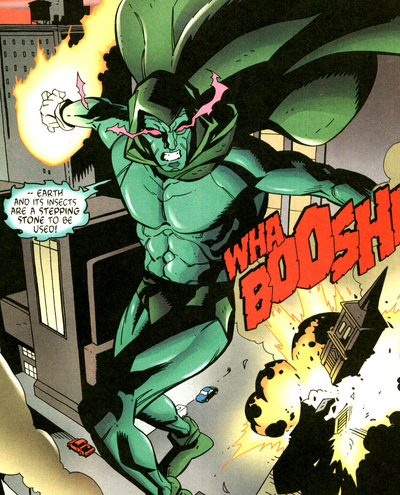 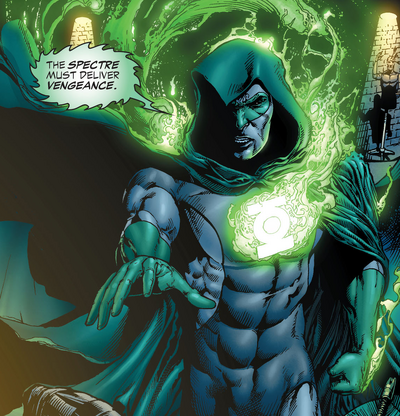 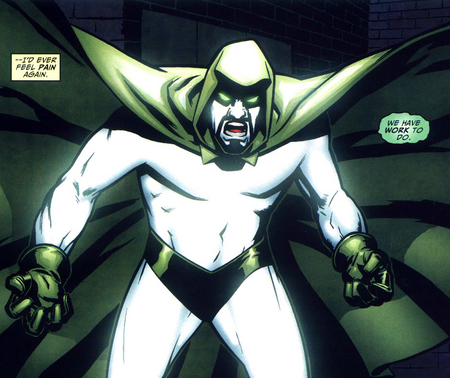 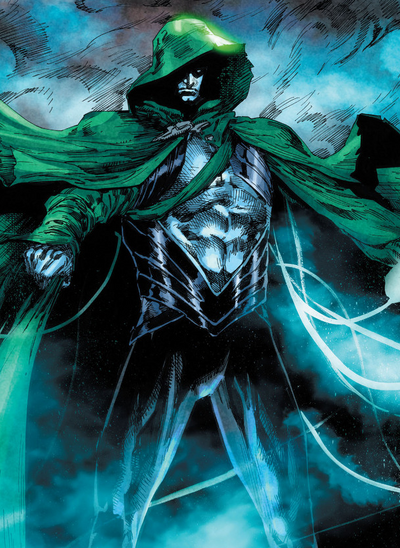 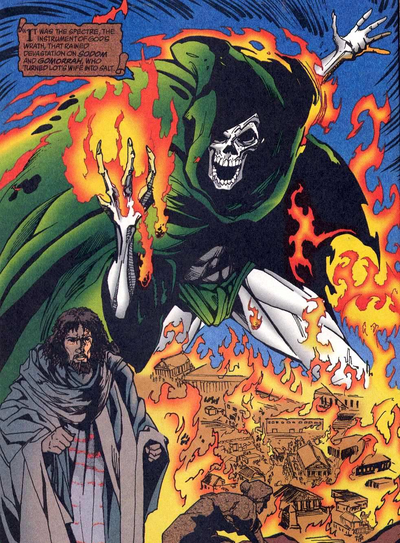 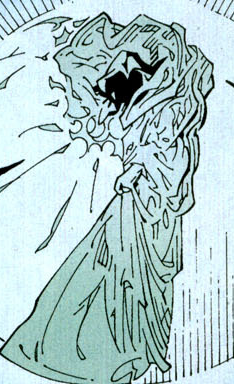 The Spectre, in the time before time began, was a rebellious angel named Raguel who was seduced to Lucifer's side against the Presence, becoming the demon Aztar. When he repented his sins, begging the Presence for punishment and mercy, he was stripped of his identity, forgetting all he was and becoming the Wrath of God. After the former Wrath of God, Eclipso overstepped his bounds and was cast out of his role, the Spectre took up his duties. The Spectre was cast into Limbo with the birth of Christ, and after the crucifixion the Spectre returned with a vengeance, only to learn from Michael that the Presence had decreed his aspects must now walk the Earth bound to mortal souls.

The Spectre inhabited various hosts over the years, and in the 1930s he came to inhabit the soul of murdered police detective Jim Corrigan. After his time with Jim was done he was briefly tricked and bonded by Asmodel, who was then usurped by the soul of Hal Jordan. The Spectre bonded Jordan in part to keep Parallax from wreaking further havoc on the universe. After Jordan was resurrected, and Parallax freed, the unbound Spectre was manipulated by Eclipso into attempting to destroy magic, murdering various mystical beings. He murdered the Lords of Order and Chaos and the Presence bound him again, this time to Crispus Allen. Following Flashpoint, the Spectre is once again hosted by Jim Corrigan.

Age: Inapplicable, older than creation itself

Superhuman Physical Characteristics, Extrasensory Perception (Sensed Eclipso-Jean Loring against her will), Cosmic Awareness (In tune with the "web of being"), Martial Arts (Demonstrated superior fighting skill even without powers), Holy Manipulation and Abstract Existence (Type 2; The Spectre is an embodied idea of the Presence; the same was restated in Post-Flashpoint continuity), Immortality (Types 1, 2, 3, and 7, and 8), Higher-Dimensional Existence (The Spectre's true self originated from the Silver City), Non-Corporeal (Isn't truly a physical being), Flight, Aura (Very powerful), Invulnerability (To physical attacks as well as various energy and matter manipulation-based powers), Reality Warping (Often warps reality to punish his victims), Magic (Extensive knowledge of spells and counterspells), Energy Manipulation, Breath Attack (Can fire energy beams from his mouth), Matter Manipulation (Created a miniature sun in his palm; can create new bodies out of matter), Antimatter Manipulation (Can fire blasts of antimatter), Transmutation (Turned a man and his accessories to salt; Turned Superman to salt and others' eyes to fly larvae), Petrification (Turned Zauriel's wings to stone), Space-Time Manipulation (Can seal cracks in creation; Placed Jean Loring in a time loop), Time Stop (Can halt time around him), Time Travel (Can take others back in time and leave them in the big bang), Age Manipulation (Aged a woman to death), Existence Erasure (Turned a man to nothingness, removed an elder god from existence, and erased a ghost. Erases the beings he consumes), Deconstruction (Caused a man to disintegrate), Regeneration (Low-Godly; the Spectre's physical bodies are creations that can be remade as long as its true self remains intact), Duplication (Can separate into multiple bodies), Shapeshifting (Can turn into non-organic and organic forms, as well as pure electricity), Size Manipulation (Stated he can grow as large as the universe), Invisibility (Can turn invisible), Intangibility (Can allow attacks to pass through him; phased into Atom Smasher's chest and stopped his heart), Non-Physical Interaction (Crushed dozens of spirits in his fist), Life Manipulation (Brought stuffed apes to life to kill a poacher), Necromancy (Can summon the dead to torment the living), Weapon Creation (Can create matter out of energy), Damage Boost (Funneled energy into Damage to help recreate the big bang), Teleportation (Can teleport others alongside himself), Telekinesis (Can disassemble objects and move planets), Telepathy, Mind Manipulation (Made a man commit suicide), Memory Manipulation (Erased Martian Manhunter's memories), Soul Manipulation (Can destroy souls and tear souls out. Severed control over all of humanity's souls from a necromancer), Empathic Manipulation (Removed evil from a man), Fear Manipulation (Can cause people to go mad from fear, especially with his fear gaze), Paralysis Inducement (Can paralyze others with a gesture), Technology Manipulation (Can will weapons to stop working), Portal Creation and Dimensional Travel (Can travel to realms of the afterlife and open portals to other realms), Biological Manipulation (Altered the Phantom Stranger's face), Explosion Manipulation (Drew a nova into his hand; made people explode from the inside), Curse-based Regeneration Nullification (Madame Xanadu couldn't regrow her eyes), Void Manipulation (Can banish others into nothingness outside space and time), BFR (Banished Doctor Fate through infinite dimensions, through to the end of time), Disease Manipulation (Rotted all food and fouled all water in Kahndaq), Illusion Creation (Showed Constantine all his victims), Ice Manipulation (Froze a man), Heat Manipulation (Touching him removed enough heat from Superman's arm to cause him pain), Fire Manipulation (Summoned and controlled fire; made people spontaneously combust), Hellfire Manipulation (Removed all hellfire from Hell), Chain Manipulation (Can summon the chains of hell to trap opponents as well as form chains from his body), Earth Manipulation (Caused a volcanic eruption), Air Manipulation (Can create hurricanes powerful enough to strip flesh and shatter bone), Electricity Manipulation (Can generate lightning bolts), Summoning (Summoned a plague of insects), Forcefield Creation (Can generate energy barriers), Sealing (Sealed the Quintessence in their realm outside time and space and resealed Eclipso; Can seal others in objects), Healing (Healed his girlfriend of fatal injuries and restored life energy to Gaea), Power Bestowal (Granted Batwing protection from soul-warping hellwind), Absorption (Restored his magic by draining the Wizard and the Rock of Eternity; absorbed power from one million souls), Dream Manipulation (Broke Deadman free from a nightmare), Sleep Inducement (Put Billy Batson to sleep), Power Nullification (Sealed off Wotan's access to magic)

Resistance to Mind Manipulation (Resisted the Lasso of Truth. Withstood being controlled by Emperor Joker with the Anti-Life Equation longer than others), Soul Manipulation (Protected himself from soul-warping hellwind), BFR (Zeus couldn't banish him), Fire (Fire hotter than an atomic explosion froze on his cape), Acid (Unaffected by the Butcher's rage plasma), Transmutation (Broke free from being turned to wood), Dream Manipulation (Broke out of a demon's nightmare), Death Manipulation (Unaffected by Johnny Sorrow's face), Time Stop (Unaffected by the Phantom Stranger's time stop), Extreme Cold and Cosmic Radiation (Can freely fly through space)

Attack Potency: Multiverse level+ (Superior to Nabu. Was able to battle Zero Hour Parallax, although he was temporarily defeated), Multiverse level+ with the power of Earth's sorcerers (Overcame the Anti-Monitor at the dawn of time and caused the multiverse to be rewritten) | Multiverse level+ (Froze Neron, and all of Hell, by removing all hellfire from it, Hell being the reflection of Heaven, an infinite multiverse. Kyle Rayner said he made Parallax look like a joke) | Multiverse level+ (Casually imprisoned and tortured Neron. When Hal first became the Spectre he considered the power far greater than he ever had as Parallax) | Low Multiverse level (Fought on par with the Butcher and stopped it from taking Atrocitus) | Solar System level (Equal to Post-Flashpoint Phantom Stranger) | Low Complex Multiverse level (Forcefully banished Thunderbolt, a 5th Dimensional Imp, after showing that Thunderbolt's power could not affect him for more than a moment) | Outerverse level (By breaking the constraint of individual identity, the Spectre accessed his true nature, a spirit merged with the Logoz. He merged with the Void beyond Voids and is directly connected to the Oversoul itself)

Intelligence: The Spectre, as one of the foremost cosmic beings in creation, possesses a vast amount of raw intelligence and knowledge, including encyclopedic knowledge of spells and counter-spells, demons, extradimensional realms, etc. He was even able to briefly comprehend omniscience when given a glimpse of it by the Source. However, due to his nature, he has had difficulties comprehending human nature and motivation, and his rage-fueled nature has allowed others such as Eclipso to trick him.

Weaknesses: The Spectre can be harmed by artifacts of the Presence, such as the Spear of Destiny and Ring of Life, or by certain divinely enchanted weapons such as Pandora's knives. He can also be bound or have his power temporarily sealed by special magics wielded by extremely skilled magicians, such as Madame Xanadu. When the Spectre judges souls by entering them, he often faces more difficulty than if he had simply rendered judgment outside the victim's soul. The Spectre cannot judge souls the Presence does not allow him to. Also, the Spectre was shown to be unable to directly affect those who can wield magic invoking the Presence.

Notes: Crisis on Infinite Earths did not serve as a true reboot to Jim Corrigan's continuity as he was one of the beings responsible for the changing history. Furthermore, the time period between the Crisis and the start of the 1992 Spectre run had the Spectre drastically weakened.

For information on why JLA/Avengers is canon to DC continuity, see here.