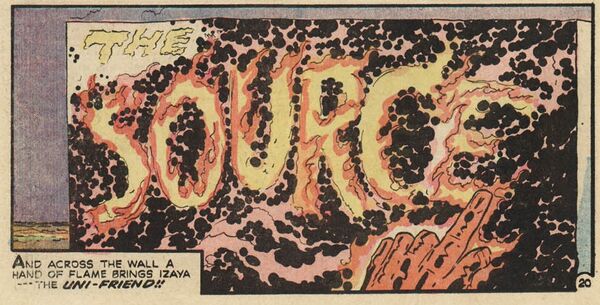 The Source is a metaphysical concept created by writer/artist Jack Kirby for his Fourth World series of comic books. It first appeared in New Gods #1 (February 1971).

It is the source of all that exists. Mostly associated with the New Gods, the Source was the supposed origin of the Godwave that is believed to have been responsible for creating and empowering the "Gods" of the DC Universe with their divine abilities. It also seems to be partially responsible for the ability of DC residents to develop super-powers, especially those which defy physics. Lying at the edge of the known universe in the Promethean Galaxy is the Source Wall, which protects the Source, and traps all those who attempt to pass beyond it.

Attack Potency: High Outerverse level (The Source resides on the same level of existence as Monitor-Mind The Overvoid, and those two characters are frequently identified as the same entity, both of which represent the featureless blank canvas used by the Writers to draw the comic story)

Notes: The Source is considered one of the three major manifestations of God.

The canonicity of the "Death of the New Gods" series is extremely uncertain, as it strongly contradicted the far more prominent, and qualitatively superior, "Final Crisis" event, along with all other writer portrayals of the entity.

Basically, The Source, in general, is treated as an embodiment of Nirvana, a formless transcendent transdual calm and completeness beyond all spatial dimensions and possible divisions.

In Death of the New Gods, it was treated as a physical being that had been divided into parts, was a stand-in for the writer Jim Starlin's Marvel creation The In-Betweener, and had a completely different humanized malevolent personality.