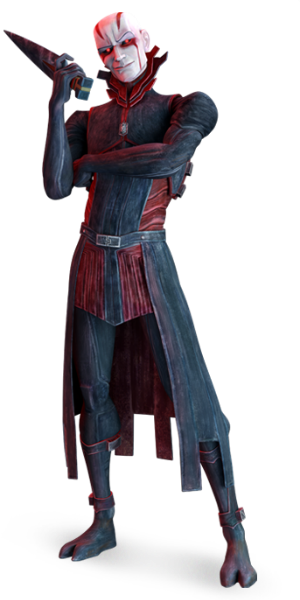 The Son, also known as the Fanged God, was the incarnation of the dark side of the Force who resided in the realm of Mortis with his family—a dynasty of immortal Force-sensitive beings who transcended the physical plane of existence. Like the other members of his family, the Son was a shapeshifter who possessed the power to transform into a winged creature that personified his connection to the Force.

Together with the Daughter, the embodiment of the light side of the Force, the two siblings shared a mutual enmity for each other and a rivalry that mirrored the two opposing sides of the Force. The Son longed to escape into the galaxy, but his ambitions were hindered by the Father, who sought to permanently bind his children to Mortis where he could maintain balance between the two.

Name: The Son, the Fanged God

Age: Over one million years old

Classification: Embodiment of the Dark Side, One of Mortis, Force-Wielder

Powers and Abilities: Superhuman Physical Characteristics, Enhanced Senses, Skilled Unarmed Combatant, Abstract Existence, Immortality (Types 1, 3 and 8), Non-Corporeal, Precognition, Telekinesis, Telepathy, Mind Manipulation, Psychometry, Absorption (Stole Ahsoka Tano's life force with a single touch), Energy Manipulation (Can reflect, redirect, and absorb energy attacks thrown at him), Elemental Manipulation, Shapeshifting, Can corrupt living beings with the Dark Side, Regeneration (Presumably Mid-Godly as he embodies the Dark Side, and it must be destroyed to truly kill him), Time Manipulation (“Broke the laws of time” in the words of the Father by showing Anakin his future as Darth Vader)

Attack Potency: At least Multi-Solar System level, likely higher (As a Force-Wielder, The Son is far superior to any Jedi or Sith in terms of Force Manipulation, which should put him far above Darth Sidious. Should easily be superior to the World Razer. Should be immensely above a mere Force-entity such as Wutzek, who has enough power to destroy a solar system. Created The Maw, a nebula-sized cluster of Black Holes, alongside his sister. Would have destroyed the galaxy if he battled The Daughter while in it. The Son's fighting with The Daughter in Mortis turned the planet into the fulcrum of the entire Galaxy and the entire Force of the universe)

Speed: Massively FTL+ (Capable of travelling across the galaxy/universe on his own. It was repeatedly stated that should the Son escape Mortis, he would "sow terror across the universe")

Durability: At least Multi-Solar System level, likely higher (Capable of trading blows with The Daughter, deflected his own Force Lightning, survived a beating from Abeloth. Endured attacks from Anakin Skywalker when he was amped by the Force that flows through Mortis, which is the fulcrum of the galaxy and the entire Force of the universe), the abstract nature of his existence makes him very hard to kill

Range: Extended melee range with physical strikes. Galactic with Force powers (Much stronger than Darth Sidious who previously showcased this type of range)

Intelligence: Skilled and experienced combatant, managed to successfully manipulate the Father, the Daughter, Anakin, Obi-Wan and Ahsoka in a plan to get off Mortis, has several millennia worth of experience

Weaknesses: His power is tied to the Father, meaning that if the Father dies, he is significantly weakened. The Dagger of Mortis is capable of killing him