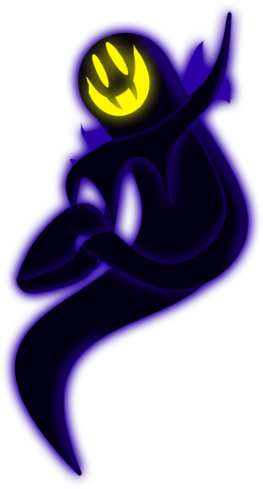 The Snatcher is a major antagonist in the indie title, A Hat in Time. For those who enter his forest, he will usually trap and manipulate them into attending various chores and tasks through the essentials of contracts, in the game, Hat Kid is one of these many victims. 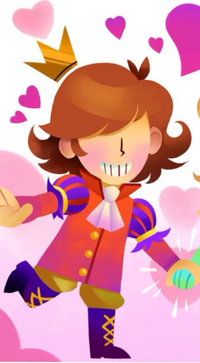 Long before the game's events, The Snatcher was a prince who lived in a village with the love of his life, Queen Vanessa. However, a misunderstanding took place, and she condemned him into a dungeon until his inevitable death, where he turned into the murderous spirit he is today. 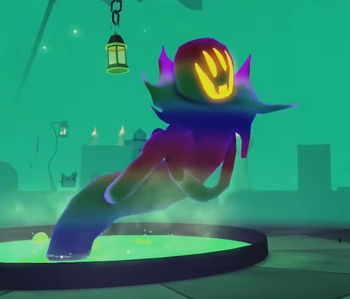 In the Seal the Deal DLC and Death Wish mode, Hat Kid is given the chance to fight subsequently harder versions of the bosses she had fought throughout the game, including The Snatcher himself. In Death Wish, Snatcher has two boss fights, the standard Snatcher EX boss fight, and the notoriously harder Ultra Snatcher boss fight.

Name: The Snatcher (His real name is unknown)

Powers and Abilities: Superhuman Physical Characteristics, Non-Corporeal (As a ghost), Large Size (Type 0), Self-Sustenance (Types 1, 2, and 3. Can breathe in space. Lacks a need for sustenance due to being dead), Genius Intelligence and Social Influencing (The Snatcher is extremely manipulative, as this is his most deceiving and cunning trait. It was implied that before Hat Kid, Snatcher manipulated one, as well as presumably many others, into signing his contracts, stealing their souls and doing his dirty work before inevitably killing them once their use runs out for him. Tricked Hat Kid into thinking he was defeated after their battle), Stealth Mastery (Claims that he sneaks into several mailboxes to gather mail for his minions, and seems to never get caught. Has snuck up onto Hat Kid when she least expects it on a few occasions), Energy Projection (Can project giant beacons of energy), Can freely remove the soul of someone (Removed the soul of Hat Kid. Stated in Mustache Girl's Castle that he has removed one hundred souls. Contracts are not obligated for this ability, as he stated to Hat Kid that he would've initially taken her soul by default, and kill her afterwards had he not needed her), Telepathy (During Death Wish, he will occasionally talk to Hat Kid from seemingly nowhere), Pain Manipulation (If you try to cheat in Death Wish, Snatcher will inflict pain onto Hat Kid as a result), Ectoplasm Manipulation (Prior to his fight, he emits a ghostly aura, which afterwards surrounds the battlefield), Pocket Reality Manipulation and BFR (After someone falls in one of his traps, he sends them to his dimension, and can even do it naturally), Dimensional Storage  (Pulls a contract from out of nowhere), Extrasensory Perception and Enhanced Senses (He will be alerted and will immediately know when someone has finished his contracts. He will also know when someone has fallen into one of his traps, teleporting them into his pocket dimension soon after. He observes and spectates Hat Kid when she is in the process of a DeathWish contract), Elemental Manipulation, which includes Darkness Manipulation (He has been depicted as a dark shadow. Can corrode the area with darkness prior to his fight), Plant Manipulation (Can trap with people with purple, thorny plants), Electricity Manipulation (Via this. Also in Death Wish mode, his beacons of energy can spew out sparks of electricity), and Heat Manipulation and Magma/Lava Manipulation (Via unknown means and primarily for the sake of his contract, he was able to significantly increase the heat of the lava in Beat the Heat, which was able to bypass Hat Kid's normal resistance to heat). Death Manipulation by himself and through contracts (By himself, he is able to instantly inflict death into Hat Kid simply by a thought. Depending on the requirements of his Death Wish contracts, if Hat Kid fails to complete them properly, the contract will kill her), Immortality (Types 1, 3, and 7), Regeneration (At least Low, possibly High-Mid. After his battle, he recovered extremely quickly, which he used to his advantage to trick Hat Kid. He will dismember himself into smaller pieces and will put himself back together soon after) and Shapeshifting (When dismembering himself, he will shapeshift into numerous versions of Hat Kid), Duplication (Demonstrated here), Explosion Manipulation (Can detonate countless explosions with his explosive flasks, Can create explosive fruits), Creation (Contracts, a seat, explosive fruit, buzz saws, and presumably anything else), Summoning (Can summon his minions and explosive flasks), Teleportation (Via BFR, as seen above. After his battle, he will teleport himself and Hat Kid to a black void), Power Nullification & Non-Physical Interaction (His explosive flasks are able to make contact with him, as well as negating his own intangibility. His normal attacks should scale to this), Size Manipulation (As shown here), Danmaku (Can bombard the area with explosive flasks. This is massively enhanced in his Death Wish boss fight) possible Body Puppetry (As shown with official art) Life Manipulation (He gave life to several Dwellers), Telekinesis, Flight, Intangibility (Can phase through solid objects, as seen with him coming up from and diving into the ground. Hat Kid is not capable of hitting him prior turning him blue with his own attack. Unlike other NPCs within the game, when he's defeated, Hat Kid can't hit him), Shockwave Creation & Vibration Manipulation (Can casually tremble the ground and create shockwaves when phasing up from it. Can create several shockwaves with his energy beacons in Death Wish mode), 4th Wall Breaking and Awareness (Added contracts to the menu and shows awareness to it. He has made numerous 4th wall breaking jokes in his Seal the Deal dialogue) Durability Negation (Via Death Manipulation, Pain Manipulation, and possibly Soul Manipulation to a certain degree). Resistance to Death Manipulation (Due to already being dead and lacking the concept of it, for he is already a soul), Acid Manipulation (He resides in acid during most of his fight, unaffected), and Time Manipulation (When Mustache Girl reversed time with Hat Kid's Time Pieces, he was unaffected by it, remembering Hat Kid, and even calling it an "alternate reality").

Stamina: High (He was perfectly fine after a long battle with Hat Kid)

Range: Extended melee range physically, several meters with ranged attacks. possibly far higher via Size Manipulation, Interdimensional with Hax (Can affect and watch over Hat Kid when she's in a Time Rift with his abilities, such as Pain manipulation, Extrasensory Perception, Telepathy and presumably various others. Capable of teleporting her to his pocket dimension)

Standard Equipment: Contracts, Explosives (Such as his Blue Flasks and Explosive Fruit), and Time Pieces

Intelligence: The Snatcher is a massively gifted spirit, possibly a genius even. Before his death, The Snatcher was a prince who ruled his forest and village alongside his queen, implying that he was once a very capable authoritative figure amongst his subjects. Not only this, but he as well attended law school to become a lawyer and as well gained a hefty amount of knowledge and education over the law, this appears to be the case due to his desire and constant usage and utilization of contracts. As time went on (Possibly around after his passing), Snatcher then grew extremely manipulative and very persuasive, using methods of intimidation and fear into pressuring his victims into signing his contract and using his minions into luring innocents into traps he has placed down around his forest via leadership. The ghost kept this as a streak, as it as well appears that he has done this to several people and has succeeded while doing so, ultimately murdering them in the end and keeping their soul to himself, this streak was however broken with Hat Kid, as she was able to work around his manipulation, beat him in a fight, and depart from his forest with all acquired Time Pieces that fell within the Subcon Forest. Snatcher is a very effective opponent in battle as well, being able to widely use all of his abilities in one setting to outnumber, overpower and trick his opponents.

Standard Tactics: If given the chance and through preparation, Snatcher will usually manipulate and lure his victims into various forms of traps. It can be something as simple as planting a trap in a random location & waiting for someone to stumble upon it, to something more polished, like recruiting one of his many minions to lure someone into them, once trapped, this will alert Snatcher in the process. Snatcher will then teleport the victim to his pocket dimension, where he appears and will blackmail the person into doing one of two choices: Either submit to him and oblige to his contracts or die on spot. If the former is chosen, Snatcher will reap their soul and will give them several unfair and tedious chores for his own good. If the latter is chosen, then Snatcher will instantly inflict death upon them, leaving them for dead. Regardless of the choice of the victim, it is implied that Snatcher will inevitably kill the person no matter what, once their use for him dwindles, he will then proceed to murder them. In terms of battle, Snatcher will immediately bombard the environment around him with gigantic beacons of energy in an attempt to engulf his opponent in these beacons. He will also expand the variety of his attacks by summoning dozens of his minions, shapeshifting into his opponent to disorient them, create shockwaves, use Danmaku, or even combine these abilities and execute them all at once. The Snatcher has other unique hax, such as BFR and Death Infliction, but might only use these abilities as a last resort in battle. If he were ever defeated, chances are Snatcher might even trick his opponents into thinking he is severely fatigued and might proceed to do something to them.

Weaknesses: He becomes tangible when Hat Kid threw him one of his flasks, is arrogant

Gumball Watterson (The Amazing World of Gumball) Gumball's Profile (Gumball was 4-A, bloodlusted and fully equipped. Ultra Snatcher was used. Speed was equalized)

Luigi (Mario Bros) Luigi's Profile (Speed was equalized, Base Luigi and Ultra Snatcher were used, and both were bloodlusted)

Discord (My Little Pony) Discord's Profile (Speed was equalized, and both characters were bloodlusted)

Chowder (Chowder) Chowder's Profile (The fight took place in Subcon Forest, the starting distance was 50 meters, and both were bloodlusted)

Start a Discussion Discussions about The Snatcher