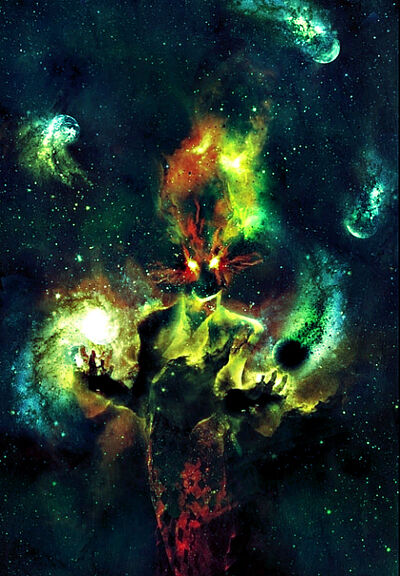 The Six-Fold God is a deity formed when the six guardians of time decide an opponent or event is enough of a threat to Multiversal stability for them to join together. While the guardians individually dislike each other, they can merge as a temporary “council” into this state.

Name: The Six-Fold God, the Guardians of Time

Age: Existed for only a short period but technically transcends time

Attack Potency: High Complex Multiverse level (Stated to be one of the strongest forces in the setting, far above transcendent beings such as Chronovores and Eternals. Formed of the six guardians combined, and as such is superior to them on an individual level. Is said to rule over countless multiverses. Described as the pinnacle of 11-D beings in the verse)

Durability: High Complex Multiverse level (Presumably superior to the guardians on an individual level, who can survive attacks from each other)

Standard Equipment: The Key To Time

Intelligence: Nigh-Omniscient (Has the knowledge of all guardians combined)

Note: There are some powers in the Omniverse that can do anything. The Guardians, for example. The only things that bind them are codes of conduct, civil laws designed to give sentient races some means of maintaining a stable existence. I sometimes wonder if that’s the reason the Time Lords are so introverted... they’ve bargained with creatures who could pull the arms off spiral galaxies.

Start a Discussion Discussions about The Six-Fold God