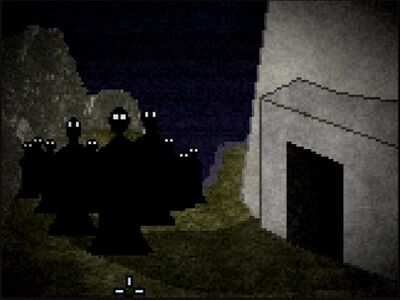 The Night Folk, or Shadow People, are a rudimentary civilisation of shadowy beings who inhabit a cold dream dimension.

Age: At least two million years (They have existed since the dawn of the human race)

Territory: A dimension parallel to our own. Their scope of influence in this dimension in unknown

Technology/Abilities: As the Shadow People lack any forms of military technology, they are limited to their own extensive physical powers, which they can utilise to possess sleeping people. They also possess Immortality (Types 1, 3, 5 and 6), and can also regenerate from being turned into vapour (Mid-High)

Attack Potency: Physically, the Shadow People and their thralls measure at least Average Human level, however, with enough preparation, they could potentially reach Mountain level via access to nuclear weapons

Power Source: Hydroelectric (In the Deeper Sleep game, it was revealed that the Shadow People were able to use rudimentary water wheels to generate limited power)

Industrial Capacity: Poor. The Shadow People are not able to possess people fast enough to be considered a threat, despite the quantity of lucid dreamers in the world (Approximately 20% of the world has reported lucid dreaming at least once a month)

Weaknesses: The Shadow People are confined to the dream world, and require great effort to manifest in the real world. They do not also appear to be very intelligent as a whole, and toy with their prey before attacking. They are also unable to co-ordinate efforts between their possessed thralls and their own soldiers in their dimensions

Retrieved from "https://vsbattles.fandom.com/wiki/The_Shadow_People?oldid=4380726"
Community content is available under CC-BY-SA unless otherwise noted.