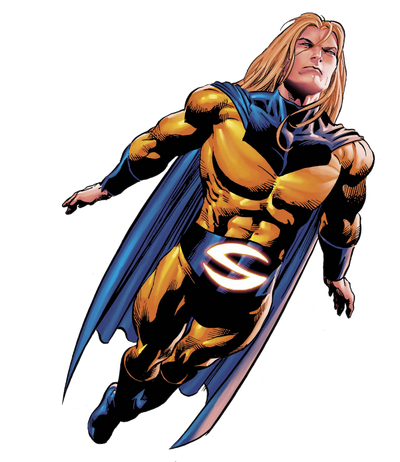 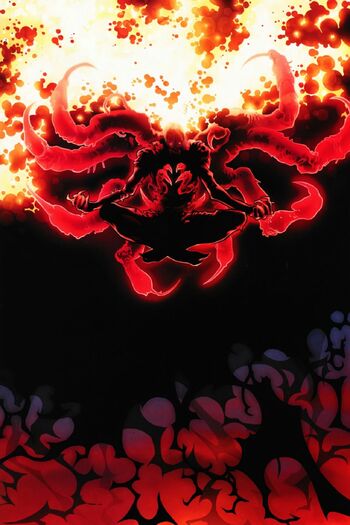 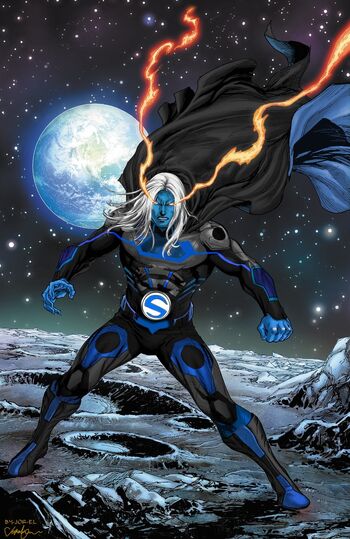 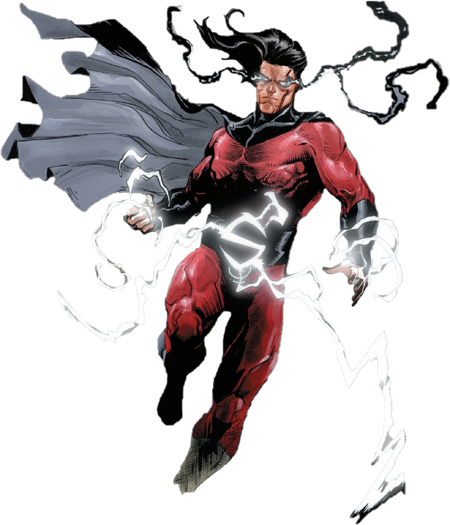 The Sentry (Robert "Bob" Reynolds) is a fictional character, a superhero in the Marvel Comics Universe. The character first appears in The Sentry #1 (Sep. 2000) and was created by Paul Jenkins and Jae Lee, with uncredited conceptual contributions by Rick Veitch.

Empowered by the enigmatic Professor's secret formula, high school student Robert Reynolds became a superhuman. After trouncing the school bully who had tormented him, Reynolds sewed together a costume and made his debut as the heroic Sentry. One of very few super heroes active during the years just prior to the Fantastic Four's emergence, Sentry gained new importance when the new wave of heroes rose to prominence. Almost instantly deducing Spider-Man's secret identity, Sentry became a role model for the young hero, as well as an ally to the X-Men, an equal to Reed Richards and a friend to the outcast Hulk. The Sentry even battled Dr. Doom alongside the Fantastic Four and defeated his greatest enemy, the General, with the X-Men's aid.

During this period, the Sentry married the love of his life, Lindy, and took the young Scout as his sidekick; but the arrival of the Void, a shadowy monster that exploited its enemy's greatest fears, ended the Sentry's charmed life. The Void nearly killed Scout, drove Hulk into a rampage, and murdered over one million people in Manhattan. Discovering that the Void had been the dark aspect of his own powers, the Sentry teamed with Reed Richards and Dr. Strange to create a system which made Earth's entire population, themselves included, forget all about the Sentry. With the Sentry inactive and forgotten, the Void vanished.

Classification: Human enhanced by chemical serum (a much more powerful version of the one used on Captain America); Angel of Death

Powers and Abilities: Superhuman Physical Characteristics, Enhanced Senses (could hear someone calling him on the other side of the Earth and perceive people's auras and other energies), Flight, Self-Sustenance (Types 1 and 2), Telepathy, Telekinesis (his mind holds his physical powers together), Energy Manipulation and Projection (Like drawing on ambient energy, calming the Hulk with his aura, and sometimes displaying energy physiology), Energy Absorption, Attack Reflection (Can send a attack back with a wave of his hand), Forcefield Creation (Created a forcefield out of light to deflect Terrax' blast), Elemental Manipulation and Weather Manipulation, Light Manipulation, Darkness Manipulation, Invisibility, Intangibility, Matter Manipulation (Atomic level), Transmutation (Transmuted a rock into a Healing Orb), Memory Manipulation (Repeatedly wiped the memories of everyone on Earth over and over), Empathic Manipulation (Used his powers to calm down the Hulk), Mind Manipulation (His telepathic power is greater than even Charles Xavier's), Soul Manipulation (can devour souls), Power Bestowal, Dimensional Travel, his body's atoms are an instant ahead of the current timeline (and their nature was unknown to Molecule Man relative to all the molecules that he had experienced), can survive in outer space, doesn't need sleep, air, food or water, Immunity to diseases, Regeneration (High, possibly Low-Godly), Healing, Immortality (Types 1, 3, and 4), Life Creation, Resurrection, Teleportation and Transformation, Resistance to Mind Manipulation (His mental shields are strong enough to keep out Charles Xavier and Emma Frost, resisted Doctor Strange's Mind Manipulation, Acid Manipulation (withstood acid that could easily melt through metals) and Heat and Magma Manipulation (stood in lava)

Attack Potency: Solar System level (Repeatedly stated to have the power of a million exploding suns, which has been confirmed to be literal. Possesses planet-busting power even when shrunk to subatomic size. He provided half the force that halted the Celestial Exitar, who was much larger than the Earth and couldn't be stopped by Rogue who had the power of almost all the superheroes, and he has outmatched Thor and Terrax in physical struggles.  His energy blasts can easily knock out Thor. After his three personalities merged together, his power increased to the point that he snapped Scout's neck, who became the new Sentry and was overpowering him before this)

Speed: Massively FTL+ (Scaling from Thor and has reacted to his Mjolnir throws. Often shown flying at many times the speed of light, and crossing interstellar distances)

Striking Strength: Solar System Class (Slapped away Thor and Captain Marvel at the same time. Knocked out Thor in 2 hits)

Stamina: Very high. (He lost his superpowered state after an extended brawl against World War Hulk, while also expending enough energy for Hulk to reverse into his human Bruce Banner form. The Sentry can keep fighting with no power loss even after having his body destroyed multiple times)

Range: Standard melee range for his human form. The Void can extend himself for hundreds of kilometers. At least multi-planetary range with energy attacks

Standard Equipment: CLOC sentient computer system that feeds him information from all over the world and prioritizes what emergencies he should handle

Intelligence: Extraordinary Genius (The Sentry helped to design his Watchtower along with Reed Richards, and built a robotic dog stronger than the Thing and Wendigo, but he can be impaired by his psychoses and insecurities. The Void built or created his own twisted parody of the Watchtower and CLOC, including drones capable of hurting the Sentry)

Weaknesses: Limited hand-to-hand combat skills. He is mentally unstable and a relapsing drug addict, prone to be manipulated by cunning individuals (like hacking CLOC to overwhelm and deceive him with false disaster information, which distressed him into inaction for hours). He becomes weaker if his mental state wavers/loses confidence, and dumping him in the Negative Zone (a dimension where all matter is negatively charged) massively depowers the Sentry, but not the Void persona

Note 1: The Sentry being stated to have fought Galactus to a standstill once (later stated to have happened with the help of Nate Grey) should remain a non-feat as long as details regarding the state of Galactus and the fight itself remain unknown.